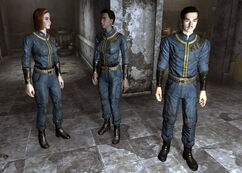 “You're the one who saved us! Thank you.”

Vault 34 dwellers are the last surviving non-ghoul residents of Vault 34 still inside in 2281.

The three dwellers were originally residents of Vault 34 before the reactor leak destroyed the vault and mutated the other inhabitants. They are first mentioned on a terminal inside the vault's reactor room, in a message titled "SOS." After a bomb was planted in the vault swimming pool, the doors of the lower level sealed, and these dwellers were trapped down there along with Horowitz. The message states that the writer (probably Horowitz) is trapped with his family and a few others. They await someone to reroute control of the vault so that they can escape, although this is a slim hope due to all of the feral ghouls and radiation.

Add an image to this gallery
Retrieved from "https://fallout.fandom.com/wiki/Vault_34_dweller_(human)?oldid=3233723"
Community content is available under CC-BY-SA unless otherwise noted.