Et Tumor, Brute?
Hard Luck Blues
I Could Make You Care
All Fired Up!
Suits You, Sarah

Play sound
Industrial_Junk.ogg
“Ages ago, long before I was born, we lived underground. Everyone had guns but the overseer wouldn't let us explode anything, not even a hand grenade. We left and wandered the wastes. There were savages with knives. We blew them up with frag mines and grenades, burned them with flamethrowers.

Vault 34 is one of the Vault-Tec Vaults, located southwest of Nellis Air Force Base in the Mojave Wasteland in 2281.

As part of the Vault social experiment, the armory was overstocked with weapons and ammunition which gave it a gun focused culture.[1] It was also equipped with a great number of recreational facilities, including a full-sized swimming pool, at the cost of living space. By 2281, it still has people living in it,[Non-canon 1] including Horowitz, although most of its residents have become feral ghouls and glowing ones. They are still able to speak with some level of intelligence. According to various sources inside the Vault, the Vault became overpopulated.

This information is corroborated by Boomers historian Pete, who tells the Courier that the Boomers used to occupy Vault 34, but they grew tired of not being allowed to use their weapons so they left and started a community at Nellis. The fact that Pearl possesses the key to a gun case located deep in Vault 34 contributes to the credibility of this story.

After the Vault dwellers' exodus from the Vault, the main exit was sealed and guards posted to prevent anyone else from leaving. This is counterintuitive to the Vault's overpopulation problem, coming to a head years later, with the overseer proposing population control measures. This resulted in a portion attempting to overthrow the overseer, after which they unsuccessfully stormed the armory, damaging areas of the Vault in the process, such as the reactor cooling vents, the main computer systems, and other infrastructure. Consequently, the damaged reactor began leaking radiation throughout the Vault, and attempts to repair the reactor by the engineering team failed. Panic then set in. Whether by accident or design, the main exit could not be opened again, trapping the residents inside, their only hope being an automated unsealing of the Vault in the near future or external intervention before dying of radiation poisoning.

Outside, just in front of the entrance, is a U.S. Army truck with radioactive barrels in the back and several golden geckos will spawn. The interior itself is unique among the Vaults of the Mojave, having a much longer access tunnel appearing to be a natural cave, as well as a radically different layout. Moreover, the Vault interior is highly irradiated. Precautions should be made to address rads accumulated while exploring, as the player character will start to become irradiated immediately upon entering Vault 34. The radiation alongside enemies approaching from all directions will additionally threaten the Courier.

The first floor of the Vault consists of a long entrance tunnel, blast door, atrium, clinic, as well as a few apartments. Although this Vault can feel a little like a labyrinth, it is mostly symmetrical in layout, although some halls have collapsed or been barricaded, forcing alternative routes to be taken. A flooded area along the western side contains the corpse of a Vault technician glowing one under a desk. The corpse holds the Vault 34 security terminal password. 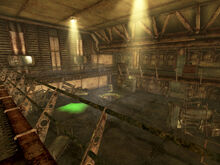 The entry room is completely devoid of items, but an overseer's journal fragment can be found in the control booth. Most of the loot found in this section is located in lockers or dressers, although first aid boxes are scattered around, as well as 10mm pistols and 10mm submachine guns. Several doors in this Vault move up and down indefinitely due to rubble blocking the entryways. The doors cannot be interacted with. All doors in the Vault feature a gold stripe instead of the number "34."

A medical center includes a broken Mark III Auto-Doc. It cannot be repaired by the player character, but its diagnostic module can be used as one of the solutions for the quest Et Tumor, Brute?.

There is a terminal (Science 100) on this level, located in the utility room, through the clinic, which can pump water out of one of the flooded areas. To activate the terminal without hacking, backtrack a small amount to the flooded area which will be on the right when facing the armory door. Straight down at the bottom of the pool is another dead glowing Vault technician under a desk with the Vault 34 utility terminal password. This can be used on the terminal in the utility room in order to drain the water from that same flooded area and gain access to the security room. Opposite of the utility room is another overseer's journal fragment. This level also provides access to the armory and the overseer's office. 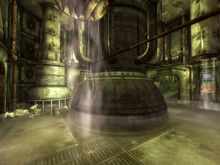 This section has higher radiation than the rest, excluding the armory, as it contains the damaged reactor of the Vault. At the end of the main hallway is a door to the flooded areas of the Vault, which are inaccessible, and a small room containing a few security guards and a True Police Stories on the floor. One of the overseer's journal fragments is also found in this room. Be warned that upon entering, more ghouls will break through the inaccessible door labeled "operations" and attack. Under the stairs is the less flooded engineering level, ending in the reactor chamber itself. The terminal next to the door is used to open it, and the terminal inside the reactor itself is required for the quest Hard Luck Blues. The overseer's window overlooks an inaccessible part of the armory. 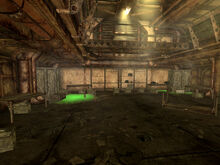 This is a small area that begins at a staircase and ends in a hallway. One way goes to a small common room with a reloading bench and a copy of Guns and Bullets by a couch. The other way goes to the armory through a door that needs to be unlocked with the overseer's terminal before it can be entered. To access the armory, two passwords from two ghoul engineers that are in submerged areas must be found. Then a terminal must be used to pump water out of a flooded area and a second terminal will be used to unlock the overseer's door. The overseer is a feral ghoul reaver, who is directly assisted in defense by two turrets.

Once neutralized, the armory password is gleaned from the corpse, which allows the terminal to be hacked and armory accessed by progressing through the clinic. The armory is a small, two-level room, with weapons and ammunition scattered around on the floor, tables, and shelves. The unique weapon All-American is found on an overturned table to the right side of the armory, and in a Very Hard locked footlocker, is the pulse gun. Most of the weapons in the armory are in very poor condition. The upper gantry is inaccessible. 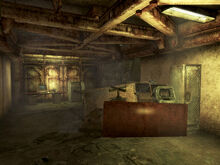 The door to this small area is underwater, but can easily be accessed once the water is pumped out. It contains security guards and a set of security armor. An overseer's journal fragment is found on the desk, next to the terminal which unlocks the overseer's quarters.

Sydney Wolfram was responsible for the concept and implementation of Vault 34.[Non-canon 2]

Guns and Bullets located on the small metal table, in the armory common room

A flooded room ready to explode under the water pressure 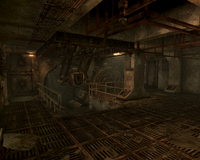 Outside the gear door

The cave outside the Vault

The All-American inside the armory 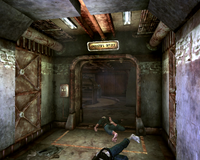 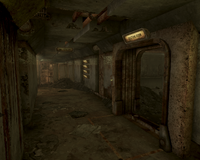 The Vault's door (only viewable with noclip), notice how the door lacks the number