Still in the Dark
Aba Daba Honeymoon
I Could Make You Care
Bounty Killer
I Love Bananas
Suits You, Sarah

Play sound
Underground Troubles.ogg
“That Vault is a hornet's nest. If you have second thoughts, no one would think less of you for it.”— Colonel Hsu

Vault 3 is one of the Vaults constructed by the Vault-Tec Corporation in the Mojave Wasteland. It was constructed in the southwestern part of Las Vegas, on the outskirts of the city's industrial sector. Save for some flooding in the lower levels, the Vault is still in working condition in 2281. It is occupied by the Fiends, who killed all of the Vault's original occupants.[1][2] The Fiends use Vault 3 as a secure fortress and drug den.[3]

Vault 3 is one of four Vaults in the Mojave that contains living human inhabitants, the others being Vault 19, Vault 21, and Vault 34. Nestled within the South Vegas ruins, Vault 3 was one of the seventeen control Vaults, resulting in it not having an experiment.[Non-canon 1] All was going well in the Vault until a water leak occurred sometime in the 23rd century, forcing the residents to open the Vault to find help. The original Vault 3 inhabitants opened their doors and began to trade with people outside of the Vault. For a couple of weeks, it went well and the inhabitants made a good living. However, this also brought the Vault to the attention of the Fiends.[4]

Exploiting the Vault dwellers' naivety and lack of security, the Fiends successfully conned themselves into the Vault, upon which they killed the inhabitants and claimed the Vault for themselves.[1] Using the vault as an impenetrable base of operations, the Fiends have since grown steadily stronger, becoming a serious threat to the people living on the outskirts of southwestern New Vegas as well as a constant nuisance to the New California Republic Army command stationed at Camp McCarran.[5]

In many ways, Vault 3 was the ideal post-apocalyptic community. The Vault's isolation did not affect the residents for generations, they maintained an orderly, democratic society and, unlike other Vaults (in particular Vault 101), the overseer was not a dictator or megalomaniac.

The Vault is located under a building in the South Vegas ruins and is the base of operations for a gang known as the Fiends. Its location can be gained from the colonel at Camp McCarran after volunteering to help with the gang problem, from Elder McNamara of the Brotherhood of Steel during the quest Still in the Dark, from Diane during the quest Aba Daba Honeymoon or from Private Ortega in the barracks at the NCR sharecropper farms.

The Vault door, which is opened by the adjacent control panel, is connected directly to the South Vegas ruins and therefore provides no loading point for the Vault interior. This explains the lack of a door opening sequence.

Inside the entrance is a Fiend guard, who will question the Courier on what they are doing there. If the Courier successfully passes a Speech check of 64 or if they are wearing Great Khan armor, they can navigate the Vault without being attacked. The Courier can remove the armor after the initial dialogue with the guard. This guard levels with the Courier, and will have a high HP at higher levels, with a maximum of 260 HP at level 30.

The walls of the Vault are covered with graffiti, presumably done by the occupying Fiends. Much of the graffiti in the Vault is the same as that which can be found on the Brotherhood's bunkers in Hidden Valley. In one of the toilets, there is graffiti on the wall of a stick man and woman. It's an enlarged version of the one in Hidden Valley. Overall, there are about five hackable terminals inside the Vault, which contain information about the Vault's history.

The leader of the Fiends in the Vault, Motor-Runner, can be found in his throne room in the northern part of the maintenance wing along with his two guard dogs, BoneGnash and GhashBone.

On the main floor of the living quarters, there is a cage holding three captives, including Rick Lancer, Rachael and Dennis. The cage also holds the body of the fourth captive, Carter, who managed to escape to search the Vault for weapons before being caught and subsequently killed. Daniel, the Fiend who holds the key to the cage can be found in one of the southernmost rooms of the living quarters. Alternatively, the cage door can be picked without Karma loss, and no Fiends will become hostile regardless of detection. In addition, the captives will leave the cage and walk in the crouched "sneak" position past all of the Fiends in the Vault to the front entrance, and the Fiends seemingly pay them no mind.

Two of the rooms in the living quarters each have a deceased Fiend on a bed, surrounded by empty syringes, Jet and Psycho. Around the southern part of the living quarters is a bedroom containing a terminal with an administrator "Billy boy" and a function called "Compose Automated Blast Message." However, this does nothing, stating that the system is offline. Some of the Vault is flooded, and the flooded areas are long and difficult to swim through with enough time to return for air before taking drowning damage. In addition, the water is irradiated at 1 rad/sec. The rebreather or Turbo will aid in searching these areas.

If the Fiends are non-hostile, looting will not make them hostile, nor will it impact Karma.

Vault door from inside 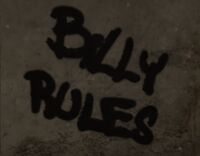 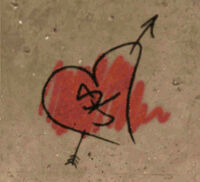 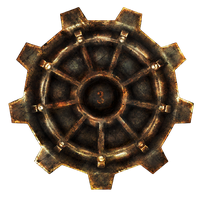