Still in the Dark
There Stands the Grass
Bleed Me Dry
I Could Make You Care
Poor Meat Never Makes Good Soup
Suits You, Sarah

Honest Hearts
Old World Blues
"The Vault of the Future"

Play sound
The Vault of the Future.ogg
“A traveler that passed through here not long ago told everyone he met that there's some kind of plant paradise to the west where food is abundant. All the people foolish enough to listen to him and head out that way never came back.

Vault 22 is a Vault-Tec Vault in the Mojave Wasteland in 2281. The Vault door is open, with various kinds of plants around the exterior and creatures such as giant mantises. It is located and can be approached from south-southwest of the Griffin Wares sacked caravan, east of Jacobstown and west from the Thorn.

Before the war, the Vault contained scientists working to improve crop production to combat global hunger.[1] Projects underway within included those aimed at developing advanced fertilizers as well as those focused on increasing crops' resistance to insects, drought, and disease.[1]

After the war, the scientists within the Vault continued agricultural-based initiatives, with the goal of sustaining the Vault population with plants grown within its confines.[Non-canon 1] Designed as a green Vault, people selected for populating it were dedicated to goals surrounding plant life and crop expansion. One of the experiments revolved around Beauveria mordicana, a fungus designed for pest control.[2] The Vault scientists began experimentation, it became airborne.[3][4] Fungal spores gradually spread through the Vault, infecting the population.[5]

After several inhabitants became sick with a pronounced cough, scientists were confused and attempted to pinpoint the cause. The first confirmed infection and fatality was Dr. Harrison Peters.[6][7] The subsequent reanimation of his corpse frightened and bewildered the scientists, who attempted to contain those who were ill.[4] When exposed to B. Mordicana spores, the host is slowly overtaken by the fungus.[8] The affliction kills within 10 to 20 days, but the pathogen within continues to thrive, causing reanimation to occur.[9][10] In response to the outbreak, the remaining scientists attempted to eradicate those who had reanimated by releasing and then igniting gas in the lower levels of the Vault.[11] This triggered a defensive reaction from the carriers, who attacked the scientists.[12]

In 2096, Randall Clark described a party of 100 former inhabitants of the vault that had arrived in Zion Canyon, heavily armed, organized, and wearing Vault 22 jumpsuits.[13] He nicknamed the group "Coughers" as a result of their loud and incessant coughing.[14] Shortly after their arrival, the Vault 22 group attacked, captured, and cannibalized the current inhabitants of the canyon.[13] Clark retaliated, killing most of the group and driving the rest out of the canyon.[15]

The Vault itself fell into disrepair over the years, overrun by the plants and wildlife. In 2281, Thomas Hildern, director of the NCR's Office of Science and Industry sought data from the location to assist NCR in staving off projected famine. Keely, a scientist from the office, has likewise gone missing. The Courier mentions that the vault has not been inhabited for 150 years when inquiring about fellow caravan hand Ricky's damaged Pip-Boy and Vault jumpsuits are found and worn by wastelanders.[16]

The entrance of this Vault is advertised with a sign that reads "Welcome to Vault 22" covered by graffiti that says "Stay out! The plants kill!" There is a hollowed-out rock directly across from the sign at the entrance. Under the graffiti, the original sign reads:

“Under the heart of the Mojave desert, Vault 22 provides a fertile laboratory for experimentation on staple crops to maximize their potential. Within the Vault, scientists and horticulturalists continue to innovate our understanding of agricultural possibilities in the fight against the global hunger crisis. The scientists who developed a miracle fertilizer within have made a profound impact on your ordinary life. So take a second to reflect on the hard work of Vault-Tec scientists in improving crop production in arid biomes like the Mojave, and for increasing crops' resistance to insects, drought, and disease.”

Once inside the Vault, the Courier will come to a door that leads to a room with an elevator and stairs. From here on out, the player character will encounter spore carriers, spore plants and giant mantises throughout the Vault. The Vault is split into five levels, and the different floors can be accessed by repairing the main elevator within the Vault (requires Repair skill of 50) or accessed by perpendicular staircases.

Immediately upon entering the Vault, to the left, there is a usable mattress, a duffle bag with some supplies, and one of Keely's terminals with entries 1 and 2. Next to the mattress, hidden between two books, is a Programmer's Digest. On the second floor, the oxygen recycling lab contains another terminal with Keely's entries 3, 4 and 5

The third floor consists of the food production section of the vault. The keycard to access the cave tunnels on level 4 is located in the common quarters (the floor below). Once inside, an Average locked door must be opened on the lower level in the northwestern corner of the room or progress to the overseer's office, and use the terminal and disengage the lock. Once inside, the first room on the left, on a shelving unit will have the Vault 22 cave door keycard. The keycard does not open the cave door on level 3 directly, it instructs the terminal next to the cave door to unlock the door.

From the elevator, down the hallway, the first room on the right has a terminal with entries 6 and 7 in the series. For the quest Bleed Me Dry, the pile of giant mantis egg(s) will spawn in the caverns down a side tunnel guarded by a giant mantis female and several giant mantis nymphs. The commons area is on the fourth floor. From the entrance, over the bridge, and forward to the billiard room are Keely's terminals entries 8 and 9. The keycard that unlocks the door to the tunnels on the food production level is found in the lower level of the common areas in the quarters' section on a shelf in the first room to the left.

If the keycard cannot be found, check the floor near the shelf, as it may have somehow fallen off. It is a darkish red/orange color. The stairs between this level and the fifth level are blocked by debris. The tunnels on the third level or the elevator can be used to bypass it. A flamer and several cans of fuel can be found in the room across from the room with the terminal that talks about Dr. Peter's reanimation. The last floor is inhabited by savage spore carriers. The large cavern contains many giant mantises and spore plants. Five mantis ootheca and Keely are located here, in an alcove on the far end of the cavern.

Vault 22 appears in Fallout: New Vegas and is mentioned in its add-on Honest Hearts. 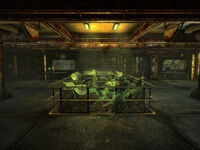 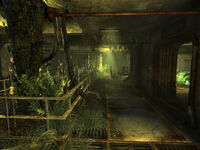 One of the food production 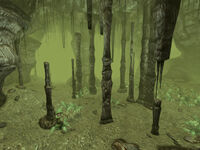 Noclip close up view of the 92 on the Vault door

Flowers at the entrance

Flowers at the entrance 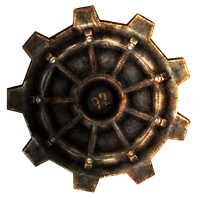 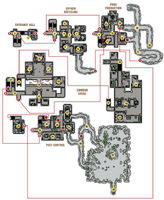