Why Can't We Be Friends?
Suits You, Sarah

Fallout: New Vegas
“Some of the computers still work, but the only files are diaries and garbage. Typical vault.”— Samuel Cooke on Vault 19

Vault 19 is one of the Vault-Tec Vaults in the Mojave Wasteland. By 2281, the Vault has been abandoned by its original inhabitants, and is currently occupied by Powder Gangers founder Samuel Cooke and his escaped convict followers.

The inhabitants of Vault 19 were segregated into two different colored sectors, red and blue, with limited contact between them. Vault 19 was unique in that it had two overseers, one for the Red Sector, one for the Blue Sector.[Non-canon 1]

The main purpose of the Vault's experiment was to induce paranoia through non-chemical and non-violent means.[1] Subliminal messaging may have been a factor, as a child states on his terminal that he was hearing high-pitched noises, and so were his friends.[2] Many journal entries indicate levels of paranoia, blaming the other faction for Vault malfunctions, and the doctor for drugging them.[3] There were also notes hearing noises,[4] feeling unusual drafts of air from vents,[5] and seeing the lights blinking patterns like some sort of code.[6] Both factions blamed this on the other, unaware that the true culprits were the overseers, at the direction of Vault-Tec. Some inhabitants suspected that the doctor may also have been involved. Patient notes in the clinic indicated that many patients were experiencing psychosis or aggression, but the notes give no indication that the doctor is aware of the cause.[3][7][8][9] In any case, when the convicts who escaped from the NCR Correctional Facility led by Samuel Cooke discovered the Vault, it was completely abandoned.[Non-canon 1]

This Vault is located in an abandoned parking lot alongside Nevada 159 between Bonnie Springs and Whittaker farmstead, northeast of Goodsprings. The entrance is concealed by a sewer grate inside the parking lot attendant's booth. There is an alternate entrance directly into the sulfur caves northwest of Whittaker farmstead. The top floor is mostly intact but most of the lower levels have been cut off by collapsed corridors.

A ladder leads down from the sewer grate into a small room containing the Vault door and its control panel. Passing through the main entrance into a hallway, to the left and right of the entrance are the two overseers' offices. On the left from the entrance is the cafeteria, where many escaped convicts sit idly. There is a first aid box under the counter, a Nuka-Cola vending machine and a Sunset Sarsaparilla vending machine in a corner.

Continuing through the cafeteria into the hallway, one will find two restrooms, both with first aid boxes on the wall near the sinks and the clinic. The clinic has a waiting room and an examination room with a large supply of chems and surgical instruments, two doctor's bags, and a copy of Today's Physician. There are five patient logs in the clinic, two under the desk in the examination room, one on top of that desk, one in the east corner of the room beneath the shelving unit, and one on the western wall, behind the privacy screen and underneath the medical trolley.

This can be accessed with a blue sector key card, which Philip Lem will give to the Courier if they offer to help him. One can also find a blue sector keycard near a terminal in a room inside the red sector. Alternatively, one may wait for one of the convicts to open the door and take a keycard from a desk in one of the rooms. The keycards can be found on almost any table in either sector next to a terminal. The blue sector keycard can also be pick-pocketed from Lem if there is no other alternative. This sector is a horseshoe-shaped hallway with many rooms on the sides occupied by convicts. A great deal of bottle caps and Vault 19 jumpsuits can be found in the dressers. At the end of the hallway is the elevator to the fire gecko infested common areas.

This section can only be accessed with a red sector key card, which will be given to the Courier when they offer to help Samuel Cooke (note that this will not affect Philip Lem or vice versa, it only opens up a new objective). This is a small "L" shaped hallway, and is much smaller than the blue sector, with similar loot in the dressers and lockers.

The common areas can be accessed through elevators in either the red or blue sectors or through the sulfur caves. If the Courier comes down from the blue sector, the room on the left in the collapsed hallway opens onto an apartment with a large hole in the ceiling and one or more fire geckos. Further down the elevator hall is a small room with double beds, a floor safe, two dressers, and a single Vault 19 jumpsuit on one of the dressers. This jumpsuit will not disappear when picked up. This room also has a Sunset Sarsaparilla star bottle cap on the desk near the terminal. Finally, there is a large room with many beds and lockers at the end of the hallway. The atrium must be opened with a blue sector keycard. The atrium itself contains more fire geckos and the entrance to the sulfur caves on the floor. The upper level can be reached by crouching under the doorway, but there is little of value there. There is one first aid box behind the bar.

The red sector is also reached by elevator. It is smaller than the blue sector, with only one collapsed room and the elevator. This is guarded by one fire gecko. The hallway leads to the shared atrium where the sulfur cave entrance is found.

The sulfur caves can be accessed directly from the Mojave Wasteland by a cave northeast of the Vault 19 map marker and through a hole in the floor of the recreation room (with several pool tables) on the living quarters level. There is also a secret elevator connecting the caves to the overseer's office that only becomes accessible by picking a Hard locked door in the caves. This leads to the secret area beneath the overseer's desk and hacking an Average locked terminal in this area that opens up the floor of the office.

The cave level of the Vault is the most damaged and is comprised mainly of yellow caves made entirely of sulfur, and the Vault's operations, reactor, and utility rooms. It is also infested with many fire geckos and night stalkers.

Beyond this cave is a larger cave with access via a staircase back into the operations center of the Vault. There is also a ladder to the Mojave Wasteland, which will lead outside, exiting northwest of the Whittaker farmstead.

Following the staircase leads to a common room with more vending machines. Exiting this room and going down the stairs will lead to a utility room. Going left will pass another entrance to the operations room. Past the blocked reactor entrance is the systems room, which has no loot whatsoever but may contain a fire gecko. If exiting the common room and progressing right (north), there is a short passage that leads to a Hard locked elevator. This can be used to access a tunnel beneath the desk in the overseer's office where Lem is located. The password to this computer may be gained from the terminal in the office itself, or it can be hacked with an Average Science skill.

Sydney Wolfram was responsible for the concept and implementation of Vault 19.[Non-canon 2] 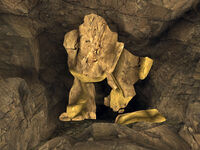 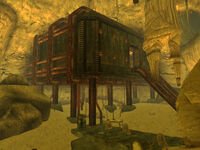 View after entering the cave 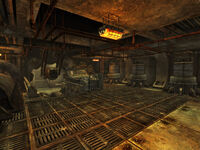 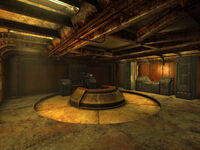 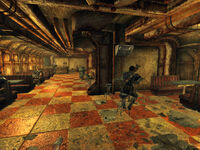 Close up of the Vault door

Exit opposite the Vault door

Eye-On-You camera outside the door 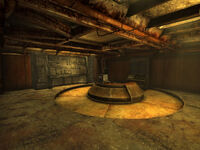