Vault 17 is a Vault-Tec Vault.

Lily Bowen and her grandchildren, Becky and Jimmy are the only known inhabitants of Vault 17. They lived in the Vault until Lily was 75 years old, at which time she was captured by the Master's Army and turned into a nightkin.[1]

Vault 17 is mentioned only in Fallout: New Vegas. A Vault 17 jumpsuit is seen in concept art for Fallout 4. 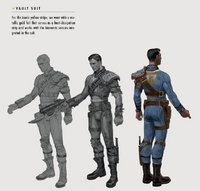 Vault 17 jumpsuit (with no armor)