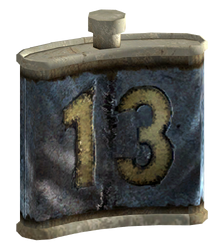 “You take a sip from your trusty Vault 13 canteen.”

The Vault 13 canteen is a miscellaneous item in Fallout: New Vegas.

As long as the canteen is kept in the Courier's inventory, they will take a sip from it every five minutes, restoring 15 HP and lowering Dehydration by 25 in Hardcore mode. An on-screen notification will tell the player character when this happens.

There is no way to forcibly take a drink, nor does the canteen ever run out of water. The five minute timer starts when the canteen is placed in the Courier's inventory (not when a save is loaded) and runs in the background, even while the Pip-Boy is up. Under certain circumstances, such as when sleeping or fast traveling right before the hydration level reaches the trigger point, the player character can skip this trigger point and become dehydrated.

Originally, the only way to acquire this item was by redeeming the code that came with the pre-order exclusive Classic Pack. It can now also be acquired by purchasing the add-on Courier's Stash or by having the Fallout: New Vegas Ultimate Edition, which includes all add-ons.

Water flask from Fallout
Add an image to this gallery
Retrieved from "https://fallout.fandom.com/wiki/Vault_13_canteen?oldid=3324704"
Community content is available under CC-BY-SA unless otherwise noted.