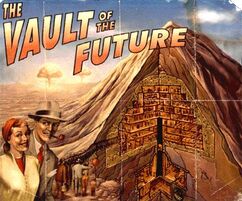 Vault 13 (or V13) is one of the Vault series of fallout shelters developed by Vault-Tec. Specifically, it is the home of the Vault Dweller. V13 also played a major role in the Master's plan, as it is one of the few remaining untouched Vaults when Fallout begins. Vault 13 was probably located beneath Mt. Whitney, as it roughly matches the location of the mountain.

Construction on the Vault started in August 2063, and was completed in March 2069. The total number of occupants (at maximum capacity) was 1000, and the Vault was meant to stay closed for 20 years. However, due to the Vault-Tec's Vault experiments, Vault 13 stayed locked up for much longer. Vault-Tec intended it to stay closed for 200 years as a study of prolonged isolation.

The starting budget for the Vault was $400 billion, and it eventually reached $645 billion. It was equipped with a Think Machine supercomputer and the primary source of power was Geo-thermal energy. The secondary power source were the General Atomics Nuclear Power backup systems. The Vault stored complete construction equipment, hydro-agricultural farms, water purification from an underground river, defensive weaponry to equip 10 men, communication, and social and entertainment files (for total duration). It was also supplied with an extra Garden of Eden Creation Kit (which when added to the Vault standard compliment of 2, makes 3 kits in total), instead of the extra Water Chips that made their way to Vault 8. if one were to look closely at the advertisement, vault 13 resembles a mushroom cloud

In 2161, V13's only functioning water chip breaks and The Vault Dweller was selected by the Overseer to be sent out into the wasteland to find a replacement chip, a task that was completed on May 10th, 2162. The Overseer gave the Vault Dweller the location of Vault 15 as a possible location of another water chip. The Overseer also gave the Vault Dweller a gun and some ammo for his venture. The water chip was eventually found in Necropolis in Vault 12. In a random encounter in Fallout 2 called Guardian of Forever you have the chance to go back in time to before the beginning of Fallout and break the water chip which is what sparks the event of Fallout

In the course of his adventure, the Vault Dweller ended up defeating the mutant threat, and was subsequently expelled from V13, as the Overseer thought that he would ruin the Vault Experiment by convincing people to leave the Vault. Despite that, many people chose to follow the Vault Dweller into the Wasteland. The Overseer was eventually tried and sentenced to death for his crime, probably after the Dwellers learned about his involvement in the Experiment.

The people who joined in the rebellion against the Overseer but didn't leave the Vault were wary to appoint a new Overseer. They contacted the Brotherhood of Steel, and purchased a fully-automated mainframe to control and regulate the Vault.

The Vault Dweller and the people who followed him eventually traveled north and founded a small village called Arroyo, and soon became tribals. Vault 13 became known as the "Holy Thirteen" among their children and grandchildren. Eventually, the grandchild of the Vault Dweller, one known as the Chosen One, was sent to find Vault 13 and bring the GECK to Arroyo, as the village was dying.

Between May 15th and 17th 2242, the Enclave opened up Vault 13. After killing few "resisting" Dwellers, they kidnapped the inhabitants. An indeterminate amount of time later, a group of intelligent Deathclaws created by the Enclave, which ran away during the course of experiments, found their new home in the deserted Vault. These Deathclaws displayed a strong pack mentality, and allowed many humans to live in relative comfort and safety with them in the confines of the vault. When the Enclave were destroyed in the autumn of the same year by the Chosen One, the survivors from Arroyo and Vault 13 founded New Arroyo.

Command center in 2241
Add an image to this gallery
Retrieved from "https://fallout.fandom.com/wiki/Vault_13?oldid=955608"
Community content is available under CC-BY-SA unless otherwise noted.