Fallout
Fallout 2
"The Vault of the Future" (Fallout)

Play sound
The Vault of the Future.ogg

Vault 13 (known as the Vault of the Holy 13 to some members of Arroyo,[1]), is a Vault-Tec Vault located in southern California. Its precise location is west of Shady Sands and Vault 15, and east of Mariposa Military Base. It was the home of the Vault Dweller. 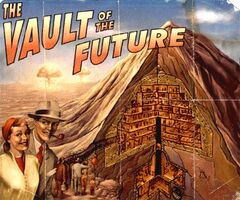 “Located in a scenic mountainous region northwest of Vault 12, this Vault offers an endless supply of pure water to the inhabitants. The rumors that the water table in the area could easily be contaminated in the event of a Nuclear War have been found by the Department of Water and Power to be completely unfounded. In the event that the water in the area were to become tainted, remote even though it may be, Vault 13 has been fitted with the government approved Vault Water Purification System. Rated to work without significant loss of output for over 250,000 hours, prospective Vault Dwellers should have nothing to fear.”— Vault locations v34.129

Construction of Vault 13 started in August 2063 and was completed in March 2069, which was the last Vault on the West Coast to be completed, covering 3,200,000 tons of soil at 200 feet. The starting budget for Vault 13 was $400 billion, although it eventually totaled to $645 billion. It was planned to operate for a duration of 10 years.[Non-canon 1] The Vault supported up to 1,000 occupants in its 100 designated living quarters. At maximum capacity, ten people would be assigned to a single living quarter, practicing a hot bunking system.[Non-canon 1]

Vault-Tec assigned the dwellers the Pip-Boy 2000 and also equipped the Vault with a Solar Scorcher, an experimental photo-electric weapon harnessing sunlight as an energy source. In addition, Vault 13 housed heavy-machinery for construction projects, sustainable hydro-agricultural farms and a water purification system sourced from an subterranean river. Dwellers enjoyed equipment for social gatherings and enough entertainment material to last the projected duration. Communication equipment kept Vault security effective despite their limited armory.[Non-canon 1] Vault 13 was also supplied with an extra Garden of Eden Creation Kit (which, when added to the Vault standard complement of two, makes three kits in total), instead of the extra water chips that made their way to Vault 8.[2] Due to its late completion, the "cry wolf" effect that hurt the other Vaults is not as pronounced in Vault 13.[Non-canon 2]

Vault 13 was a control group for the Societal Preservation Program, intended to be sealed until the subjects were needed by the Enclave, according to Dick Richardson.[3] According to the Fallout Bible, however, the purpose of Vault 13 was to remain closed for 200 years, as a study of prolonged isolation.[Non-canon 3]

Sometime prior to December 5, 2161, Vault 13's water purification chip began to malfunction. The overseer began to send out Vault 13 dwellers into the wasteland to find a replacement chip.

Amongst those sent out to search for a replacement chip was Talius.[4][5] Supplied with a Winchester Widowmaker and some 12 gauge shotgun shells, he searched unsuccessfully for the water chip for some time before hearing of Necropolis' water pump. With the help of the Necropolis ghoul leader Set, he was able to kill some of the super mutants before being knocked unconscious by nightkin, and promptly taken to the Mariposa Military Base. He was dipped in the FEV vats, which led to a rare transformation into a ghoul-like mutant similar to Harold, and was later rescued under ambiguous circumstances by the Followers of the Apocalypse. He joined them as a full-fledged member shortly afterward and remained in the Boneyard Library in the Boneyard, abandoning his initial mission.

The last known Vault 13 dweller selected by the overseer was a person later known as the Vault Dweller. On December 5, 2161 at 07:21, the overseer gave the Vault Dweller a 10mm pistol, some ammunition, and the location of Vault 15 and sent them out into the wastes to find a new water chip, a task finally completed ​in February 2162. The replacement chip was eventually found in Necropolis in Vault 12.

After this event, the overseer's choice backfired and many people chose to follow the Vault Dweller into the wasteland. Those people who had not left Vault 13 were wary to appoint a new overseer. To replace the overseer, they commissioned the Brotherhood of Steel to build a mainframe computer, a fully-automated mainframe to control and regulate Vault 13.[8] As for the Vault Dweller and followers, they trekked north and founded a small village called Arroyo. Over the ensuing generations, the people of Arroyo developed a tribal culture and revered Vault 13 as the "Holy Thirteen." Eventually, the grandchild of the Vault Dweller, known as the Chosen One, was sent to find Vault 13 and bring the G.E.C.K. to Arroyo, to save their dying village.[9]

On May 15, 2241, the Enclave sent a coded sequence to Vault 13, activating its central computer and declaring that it was time to leave the Vault. Martin Frobisher, the leader of Vault 13, gathered the Vault dwellers for the "Leaving The Vault" video, a tutorial movie from Vault-Tec about the rules to follow when Vault dwellers left their Vault. On May 16, 2241, Vault 13 was opened and greeted by two Enclave squads with Vertibirds. The squads killed three of the Vault dwellers who were "resisting capture" and stormed the Vault, kidnapping all the inhabitants. On May 17, 2241, the Enclave dropped an intelligent deathclaw unit into Vault 13 from a safe distance to kill anyone investigating Vault 13 and cloak the Enclave's presence. Other intelligent deathclaws were sent into the desert surrounding Vault 13 to check for any escapees or witnesses.

The link between Vault 13 and outer world. Remains of Ed are a good warning. There are 20 rats in the cave.

The link between Vault 13 and the outside. Here Vault Dwellers can find medical treatment.

The Vault Dwellers sleep here (around 19:00 to 8:00). Also, some are using the rooms for private meetings, like the rebel faction.

The command center where the overseer is located, as well as the Vault library. It is where the overseer maintains the Vault. Nearby is the library, armory, and water supplies room. However, the water guard gives the supplies because there is a thief who steals water. One can "spend some time researching important information" using the Science skill on the westernmost computer.

The link between Vault 13 and outer world. Nothing is here.

Intelligent deathclaws have moved in, however, they allow humans (who they found in the wasteland) to live among them. They are first brought to Joseph, the herbalist for medical treatment.

The Living Quarters serve now more as a prison for those who disturb the law in Vault 13. Also, a shrine to Vault 13's champion is being built here and it is being tended by Gordon.

The Command Center is now a place where the deathclaw matriarch lays her eggs. The main computer is broken and a computer voice module is needed to repair it.

Vault 13 appears in Fallout and Fallout 2.

That same location recreated in the Fallout 2 Mapper, showing some art style changes