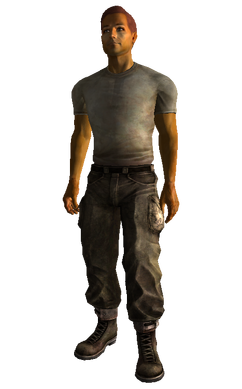 The Vault 11 survivor is a cut non-player character still present in the game's files of Fallout: New Vegas.

After the conclusion of the Vault 11 civil war, only five people were left alive. The survivors refused to continue the experiment, expecting to be killed. Instead, the vault door opened, and they were informed that they had done the "American" thing, not sacrificing their peers. Traumatized by this information, they either killed themselves or were killed by one another, with the exception of one individual. A gun dropped to the ground can be heard, followed by the last individual sighing deeply and walking away.[1]

The Vault 11 survivor was added during the development stages of Fallout: New Vegas, but was cut from the final retail release of the game.

Retrieved from "https://fallout.fandom.com/wiki/Vault_11_survivor?oldid=3290227"
Community content is available under CC-BY-SA unless otherwise noted.