Vault 113 is a Vault-Tec vault that was planned for Fallout 4.

In the files of Fallout 4, there is an unused texture for Vault 113. An image of a man dressed in a Vault 113 jumpsuit appears in The Art of Fallout 4.

The vault appears in Bethesda Pinball's Fallout table, which is itself heavily based on Fallout 4. It is the last of seven vault quests, in which it is said to contain a Luck bobblehead guarded by enemies, once the Sole Survivor finds it after sneaking past a super mutant that shoots a laser gun.

Vault 113 was cut from Fallout 4 and appears in the Fallout table for Bethesda Pinball. 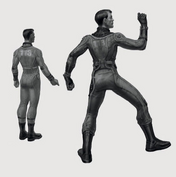