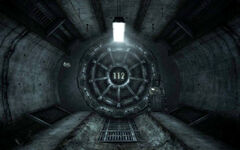 “I'm off to Vault 112 to search for anything of Braun's that might help me get this purifier up and running. All I know is that it's West of some place called 'Evergreen Mills,' and it's well hidden in some sort of garage. But I'll find it, I have to. It's so close, but that's the story of Project Purity, isn't it? An eternity of 'almost there's'. Let's see if Braun has the missing puzzle piece.”— Project Purity journal #10

Vault 112 is a Vault-Tec Vault located in the Capital Wasteland in 2277. It is located in the southwestern part of the region, underneath Smith Casey's garage, west of Evergreen Mills and south of the charnel house.

Vault 112 was one of the last Vaults to be constructed. The construction started in November 2068, and finished in June 2074. It was intended for only 85 occupants, suspended in a virtual reality world for the indefinite duration of the Vault's experiment. The Vault was built to house and tend to the needs of its overseer, Dr. Stanislaus Braun, creator of the Garden of Eden Creation Kit. Within it, Braun installed a virtual reality simulator and Visiontron loungers, initially containing several simulated utopias, the last of which is the Tranquility Lane simulation. The system should have permitted a select few to live a "perfect life" virtually, if not practically, forever.

What Vault 112's occupants did not know was that once they entered the virtual reality pods, Braun would exercise complete control over the simulation; they had no means of leaving on their own. They became his playthings, completely at his mercy. Dr. Braun, after becoming bored with various simulated worlds, would proceed to virtually "kill" each one of them. Each time after killing them, he would wipe their memory and resurrect them within the program.

The entrance to Vault 112 is inside Smith Casey's garage; it has some mole rats and radroaches, but it's nothing that cannot be dealt with. After proceeding past the counter and into the workshop, there is a large hatch in the floor just to the left; it can be opened by activating a switch on the wall beside it. Below it is a short passage that leads up to the Vault 112 door. More mole rats can be found down here.

Vault 112 houses an entrance area similar to all other Vaults, which serves as the airlock and the only connection to the outside world. A single passage in the entryway leads down to the main hall. In it are twelve Tranquility loungers arranged around a big pillar, each connected to a terminal that monitors the respective conditions of the "subjects" inside the loungers. There is also another Tranquility lounger, found in the overseer's office, located south of the main hall. The only medical unit of the Vault is accessed east of the main hall (where the loungers are).

Since it cannot be maintained by the human inhabitants as they are all in the Tranquility loungers, Vault 112 is instead maintained by a group of special caretaker robobrains. The Robobrains are non-hostile (even if one attacks them), and also lack combat inhibitors. When the player character enters the Vault, they are told that their arrival is "202.3 years behind schedule." Due to the indefinite duration of the Vault 112 experiment, the Vault uses geothermal power exclusively. This is provided by a Sure Power geothermal unit and backed up by an X-Tra Sure Power geothermal unit. The geothermal turbine level cannot be accessed. A Think Machine 3600r mainframe is housed in the main hall. As well as performing the functions of a normal Vault computer system, it functions as the simulation control computer, running the main simulation program and synchronizing all the different Tranquility loungers. It appears linked to several smaller computers, one handling each lounger's graphics processing and its occupant's medical status.

Because of it being maintained by Robobrains, and being better hidden than many others, 112 is the only intact Vault other than 101 in the Capital Wasteland. The outcome of this particular experiment is ambiguous. If Braun intended the simulator merely to satisfy his sadistic urges when he designed it, then it fulfilled its purpose completely. If, on the other hand, he sincerely intended to create a virtual haven for the residents to live eternally, the fact that his godlike position subsequently drove him insane and made the other residents' existence an eternal hell would mean that the experiment was a failure.

Back view
Add a photo to this gallery
Retrieved from "https://fallout.fandom.com/wiki/Vault_112?oldid=3512798"
Community content is available under CC-BY-SA unless otherwise noted.