Fallout 4
“No need to worry, folks! We'll get everyone situated in your new home. Vault 111! A better future. Underground!”— Vault 111 overseer

Located overlooking Sanctuary Hills, Vault-Tec designed Vault 111 to observe the effects of long-term cryogenic suspended animation on unsuspecting test subjects. Vault 111's staff consisted of an overseer and a small team of scientists, security guards and facility maintenance personnel employed on a short-term basis. Test subjects were lured to Vault 111 from the nearby neighborhoods of Sanctuary Hills and Concord and were placed in stasis pods after being told deceitfully that the purpose of the pods was for decontamination.[1][2]

According to Vault-Tec standard operating procedures, Vault 111 was to remain sealed for a minimum of 180 days, after which the Vault could be opened upon receipt of an "All-Clear Signal" from Vault-Tec, or at the overseer's discretion. However, after the 180-day mandatory shelter period elapsed, Vault 111 received no signal, and its staff faced dwindling supplies. Despite requests from the security staff, the overseer refused to unseal the Vault door, concerned that the radiation outside the Vault had not declined enough to be survivable.[3][4][5]

Shortly after, a faction led by the Vault's security and support staff engaged in mutiny against the overseer in an effort to unseal the Vault door and leave the Vault. In response, the overseer placed the Vault on lockdown and demanded all staff to hand over any food, weapons and medicine. There is no further account of events to be found, as the logs end here on both the security terminal and the overseer's terminal.[6][7]

In 2227, the Institute had discovered the location of the Vault, along with the fact that it contained an infant whose DNA would be completely uncorrupted by post-War radiation. Seeking a source of pure human DNA to form the basis of their generation 3 synths, they sent their agent Conrad Kellogg and two scientists to retrieve the infant. However, the child was in a cryo-stasis pod with one of his parents. When that parent wouldn't relinquish their hold on their son, Kellogg murdered them while the Sole Survivor watched helplessly, trapped in their own pod, before being placed into stasis once again.

After witnessing the murder of their spouse and the kidnapping of their child, the Sole Survivor awakens in Vault 111 after being held in cryogenic stasis for 210 years.[Non-canon 1] Upon accessing the Vault 111 monitoring terminal, they learn that all of the other subjects that had entered the Vault, except for themselves, their spouse and their child, had died of "asphyxiation due to life support failure." In the Dangerous Minds quest, the Sole Survivor discovers that Kellogg had been directed not to reactivate the life support for the other residents and not to release them. Sixty years later, due to an "error" in Vault 111, the Sole Survivor is released from cryo-stasis and escapes. However, it is later revealed that the release was, in fact, a personal choice made by Shaun, now director of the Institute, and not an error of the Vault as initially thought.

Unlike other Vaults, the entrance to Vault 111 not only has an atypical pneumatic hull but also acts as a hatch which gives way to an interior elevator. The inner door opens first, followed by the hatch opening. While painted in the prelude, the Vault door is rusted and dull after the Great War. There was also a security checkpoint, a feature that most other Vaults lacked. Most of the other rooms in Vault 111 include a reactor room, a recreational area for Vault staff and the overseer's office. The Vault is significantly smaller as compared to other Vault-Tec Vaults, due to the nature of the experiment.

After the release of the Sole Survivor, the Vault shows obvious signs of neglect. Frozen mummified corpses are in the pods, skeletal remains of some of the killed occupants are scattered around the interior with signs of violence and much of the machinery is no longer in proper working order. Radroaches have also invaded the Vault and serve as the Sole Survivor's first encountered enemies. However, despite the complete lack of maintenance for nearly 210 years, the Vault interior is in good condition compared to other abandoned/fallen Vaults encountered in the Capital Wasteland, the Mojave Wasteland and even some of the other Vaults within the Commonwealth.

Vault 111 only appears in Fallout 4. It is also mentioned in descriptions of Bethesda Pinball's Fallout table, which is heavily based on Fallout 4.

View of the wasteland after opening the Vault door

Traveling to the cell reveals some supplies 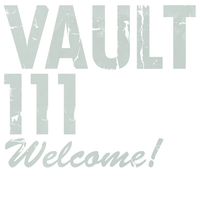 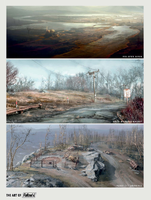 Vault entrance in The Art of Fallout 4 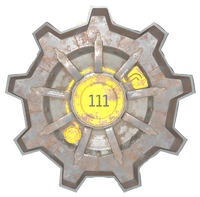 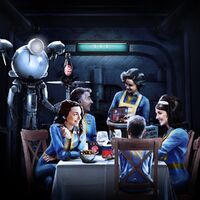 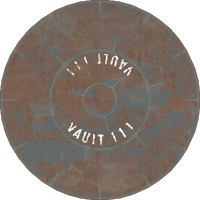