Still in the Dark
Democracy Inaction
Suits You, Sarah

Play sound
Industrial_Junk.ogg
“Vault 11 has been abandoned for decades, though few people know the story of its terrible past.”— Fallout: New Vegas loading screen

Vault 11 is a Vault-Tec Vault located in the Mojave Wasteland. By 2281, the vault is vacant of vault residents. It is west of Boulder City and southwest of the 188 Trading Post.

Vault 11 was likely constructed along with the other Vault-Tec Vaults in the mid-2060s to the early 2070s. As with the majority of other Vaults, Vault 11 served as a social experiment. Vault 11's experiment was that the inhabitants were told to sacrifice one of their fellow Vault dwellers each year or else the Vault computer would kill everyone. In actuality, if the residents refused, a message from Vault-Tec would be played. The message commended the dwellers for not selecting one of their own as a sacrifice, telling the dwellers their "commitment to human life is a shining example to us all" and revealing that no one would be killed. The message also informed them that as a reward the Vault door was now unlocked, allowing free passage to and from the Vault, but urged the dwellers to consult with their overseer before doing so.[1] However, by the time the Vault 11 inhabitants chose to stop sending sacrifices only five of them remained.[2]

Evidence gathered from computer terminals throughout the Vault describes how Vault residents selected an annual sacrifice from among their members through democratic elections. This individual would serve as overseer, and at the end of their term, they were required to enter a chamber and submit to execution. According to the residents, this would satisfy the requirement and spare the remaining dwellers. Of the original residents, only the overseer entered the Vault knowing they would be asked to sacrifice one of the dwellers, however he was unaware of the true outcome if no one was sacrificed. Shocked and disgusted with the situation they found themselves in, and resentful towards the overseer for neglecting to share the information before sealing the Vault doors, the residents chose the original overseer as the first sacrifice.[3]

The tradition of electing an overseer as the next condemned resident persisted onward. Several pseudo-political powers, known as voting blocs, emerged to influence nomination and selection. The Coalition of Vault 11 Voting Blocs provided information and oversight of this process. Six main voting blocs jostled for power, including the Allied Service Workers Bloc, Divine Will Bloc, Human Dignity Bloc, Justice Bloc, United Vault Technicians Bloc, and the Utilitarian Bloc. These blocs would nominate and support overseer candidates based on their own goals, and slather libel-laden propaganda posters on the Vault walls to garner support prior to each election.[4]

The selection process devolved significantly over time, resulting in deplorable manipulations and actions perpetrated by bloc leaders. Prior to the final election, members of the most powerful group, the Justice Bloc, led by Roy Gottlieb, sexually coerced fellow resident Katherine Stone. They threatened to nominate her husband, Nathan, as overseer should she resist. Due to their overwhelming influence as a voting bloc, this would essentially be a death sentence for her husband, and she capitulated to their demands. Afterward, the Justice Bloc members betrayed Katherine, nominating her husband regardless.[5][6]

Out of desperation, despair, and indignation, Katherine enacted a plan of retribution, subsequently murdering members of the Justice Bloc one by one. This worked for Katherine in two ways, as she had not only set the stage for reprisal but also would be a clear choice for the next overseer in place of her husband, effectively saving his life. Katherine's plan succeeded on both accounts, and after the murder of Justice Bloc members, she was elected as the next Vault overseer.[6]

Katherine Stone's first act as overseer, "Overseer Order 745," dissolved the election process entirely and decreed that moving forward, the position of overseer would be chosen at random using the Vault's computer systems. The Justice Bloc, aghast at the thought of losing their control and influence over the Vault population, decided to stage an armed coup. The fighting that ensued killed nearly all of the remaining Vault dwellers.[7]

The first audio log discovered by the player character as they enter the Vault reveals the fate of the few survivors. Despondent after witnessing the deaths of their community members, they chose death by suicide, defying the Vault computer's requirement for sacrifices and waiting for the subsequent consequences. They were bewildered by the discovery that their defiance was the original goal of the social experiment all along. They were given the freedom to leave the Vault and congratulated for their selflessness.

Learning the harrowing truth about the Vault experiment led the survivors further into despair and regret. The five survivors discussed committing suicide to punish themselves for the events that happened in the Vault, and to prevent the outside world from learning about their shameful behavior. However, they were not unanimous in their decision. In the audio log, an argument is heard between a man referred to as "Voice 1", trying to convince the other four (three males and a female) to leave the Vault. Voice 2 (female), 3 (referred to as Harry), 4 and 5 wish to die. Voice 1 tries to convince the rest to leave the Vault and spread the word about what happened there, so that others may learn from their mistakes. At the end of the audio log, four gunshots can be heard, followed by a heavy sigh and the sound of a gun falling to the floor. Four bodies are found in the entrance of the Vault.

Prior to entering the Vault, there is a hollowed-out rock to the right of the main door. The reactor and the water purification system of Vault 11 has been damaged by age and the civil war among the dwellers. Therefore, radioactivity and radioactive water are some of the main hazards of the Vault. Since portions of the Vault are underwater, many sections can only be explored while wearing a rebreather or by judicious use of air pockets in the flooded areas. Enemies encountered inside the Vault include giant mantises, giant rats, and bark scorpions.

The entire Vault has been plastered with propaganda for an election for a new overseer, with each candidate is expressing outrage and incredulity at having been nominated and why the other candidates deserve to be overseer instead. This is juxtaposed to commonly understood elections, where the opposite goals are seen, and instills a sense of perplexity to the uninitiated. Throughout the Vault, sandbag barricades, multiple traps, and several skeletons serve as evidence of violent conflict.

The Vault's entryway contains four skeletons and an audio log. A working terminal near the door allows the Courier to access more information regarding the fate of the Vault. The next room has hallways to the Vault clinic, classroom, and cigar lounge. To the right, a hallway with access to bathrooms and a staircase can be found.

The stairs lead to a lab and a computer room. One of the computers is booby-trapped with explosives. A large common room connects hallways leading to the male and female dorms, as well as an exit labeled "Admin". This doorway leads to the security office, and to the levels containing the overseer's office and the utility room. The dorms are comprised of long, interconnected hallways and bedrooms. Several Vault 11 jumpsuits can be found here in lockers and dressers. Another audio log can be found on a locked terminal, with the password in a footlocker a short distance away.

There is a copy of Pugilism Illustrated in the female dorm, second door on the right, under the overturned dresser upon entering. A small cache of flamer fuel and 5.56 rounds is concealed under and behind a large immovable mop bucket in the male dorms.

Through the door marked "Admin," following the stairs and turning to the left is a Hard locked door, which can also be unlocked by the adjacent Very Hard locked terminal. This door leads to a storage room with an assortment of ammunition, including a mini nuke. The security office contains a terminal with Katherine Stone's deposition and more ammunition. At the opposite end of the hall are several flights of stairs leading down to the lower levels.

In the utility room, the differential pressure controller required for the Still in the Dark quest for the Brotherhood of Steel is located in a locker in the righthand side of the submerged room. The utility room provides access to the atrium via the flooded lower reactor level. Conversely, a set of Average locked doors can be picked one floor above to circumvent the flooded areas. In the atrium, the Vault 11 overseer's terminal password is found on the upper balcony terminal. A holotape, Prepared speech of Gus Olson, ombudsman, for the annual overseer election, is found on the podium below. This level also features the Vault cafeteria, which has a large supply of food and a first aid box. The cafeteria's entrance is boobytrapped with explosives and a gas leak located here can cause a violent chain reaction.

Accessing the overseer's terminal with the aforementioned password can open a chamber under the desk. This opens into a long tunnel. At this point, a pre-programmed voice speaks as the Courier approaches a door illuminated by a bright light. At the end of the tunnel is a room with a single chair in the center, along with a projector. The voice instructs the player character to sit in the chair to start the presentation. Delaying this will cause the recording to repeat, "you have no choice but to sit in the chair" until the Courier complies. The exit door locks as soon as the presentation starts. Pleasant scenes are shown while a voice reassures the individual that they lived a good life and their next one will be better yet. At the conclusion of the presentation, wall panels on both sides of the room slide back, and four robots and eight turrets will simultaneously attack the player character. Remaining in the chair until the film concludes is dangerous as the robots and turrets open fire immediately. Once the automatons are dealt with, the player character can access a small room with the Vault mainframe computer inside. This computer unlocks the door and reveals the true purpose of the Vault, determining how long it would take for the population to refuse further sacrifices, essentially a test of self-preservation versus morality.

The Happy Trails slide show is a presentation created by Vault-Tec Industries specifically for use in Vault 11 and its experiment. The slide show would play when a chosen sacrifice would enter the sacrificial chamber and sit down in the chair in the middle of the room. The purpose of the slide show was meant to bring the sacrifice to false sense calm and acceptance before their violent death.

An overview of the Vault 11 walls with propaganda posters

Inside of the Vault door 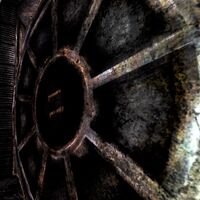 Mini nuke near the security room