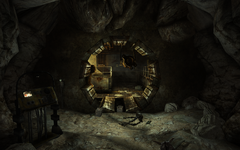 “All standard positions have been intentionally left unfilled and will be assigned by the Overseer according to the Vault 108 protocols. According to the pre-assignment medical tests, Mr. Jones has a genetic disposition for a rare terminal strain of cancer which should ideally cause him to expire within 40 months of the project's inception. These two events should combine to allow a proper catalyst that allows this project to continue as planned.”— Vault 108 Pentagon file

Vault 108 is one of the Vault-Tec vaults in the Capital Wasteland. It is located south of Canterbury Commons and northeast of the Corvega factory.

On the Vault-Tec computer in the Citadel, the premise of the experiment was explained to study conflict for leadership and power in a vault. The first overseer, Brody Jones, was known to have a genetic predisposition for a rare form of cancer that was expected to kill him within 40 months of the experiment's inception, and positions of authority in the vault went unassigned and discretion was given to the Overseer. The main power supply was also scheduled to malfunction after 240 months (20 years while the vault was planned to be sealed for 38), and the back-up power supply was intentionally insufficient to meet the vault's needs. On top of all this, the vault was given three times the normal armory stock and no entertainment recordings.

There is a holodisk found in the cloning lab (A on the map) (located near a body near one of the examination tables, this room also has a very easy locked safe in it as well as Gary 12 and 36) that hints about the fate of Vault 108. Every time Gary was cloned, it immediately became hostile to non-clones, with each one becoming more violent. After the 53rd was no different, the staff began to wonder what to do with all of the clones, as the vault's observation rooms were becoming full. The other entry in the holodisk says that Gary 54 was the same way, having injured Doctor Peterson during an examination.

The entry also states that they will be destroying some of the clones, to make room for "many more tests". What happened next is not clear. What is clear is that the only survivors are the Gary clones.

The entrance area is occupied by a colony of mole rats. The living quarters and cloning lab are inhabited by a dozen clones named Gary, all of which are hostile. With the exception of Gary 1, 25, and 32, all other clones initially are unarmed, with knives or lead pipes. Their AI, however, may direct them to pick up stronger weapons that may be nearby.

There is a Pugilism Illustrated in the living quarters, on the counter in the cafeteria (the northernmost room on the local map). 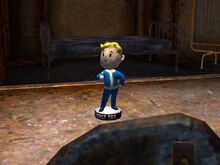 Retrieved from "https://fallout.fandom.com/wiki/Vault_108?oldid=3101220"
Community content is available under CC-BY-SA unless otherwise noted.