Fallout 3
“All standard positions have been intentionally left unfilled and will be assigned by the Overseer according to the Vault 108 protocols.”— Citadel terminal entries on Vault 108

Vault 108 is a Vault-Tec Vault located in the Capital Wasteland in 2277. It is located south of Canterbury Commons and northeast of the Corvega factory.

Construction on the Vault began in March 2061, and was cut short in December 2069 due to a work stoppage.[1] It was built to accommodate 475 residents for a total of 38 years.[1] The premise of the experiment revolved around intentionally leaving all standard positions unfilled, to be assigned personally by the overseer. This was with the exception of three named roles, including Zachary K. Jameson as chief of staff, Jerec Maddix as chief of security and Nathan Auragen as morale officer.[2]

In addition, the primary power supply was intentionally set to fail in 20 years, just shy of half of the Vault's intended active time span.[1] The backup power supply, Steam Whistle mini geo-thermal, would not be sufficient to power the entirety of the Vault, a fact the scientists were aware of.[1] In addition, the Vault would be outfitted with three times the normal amount of defensive weaponry and lack standard entertainment.[1]

For the overseer role, scientists chose Brody Jones who according to the pre-assignment medical tests, had a genetic disposition for a rare type of cancer. They estimated this would cause his death in a little over three years after the project's start date.[2] The scientists noted that, "these two events should combine to allow a proper catalyst that allows this project to continue as planned."[2]

Scientists within the Vault furthermore engaged in a series of cloning experiments. A holotape found in the cloning lab describes their efforts to clone a man repetitively. It outlined the process, in that every time the man, Gary, was cloned, he immediately became hostile to non-clones, with each one becoming more violent.[3] After the 53rd was no different, the staff began to wonder what to do with all of the clones, as the Vault's observation rooms were becoming full.[3]

Shortly thereafter, Gary 54 exhibited the same increased aggression, this time injuring Doctor Peterson during an examination.[3] The entry also states that they will be destroying some of the clones, to make room for "many more tests."[3] When the Lone Wanderer discovers the location, only Gary clones and creatures remain alive inside.

The Vault is in an advanced state of disrepair, with water leaks, rust, and collapsed sections. The door is found ajar by the Lone Wanderer upon arrival. There are three main sections one can explore, including the entrance, living quarters, and cloning lab. The living quarters and cloning lab are inhabited by a dozen clones named Gary, all of which are hostile. Most clones are unarmed, with the exception of Gary 1, 25, and 32, who have knives or lead pipes. All clones may pick up and utilize weapons that are present in the area.

The reactor area is inaccessible, due to a blockage of debris in the reactor entrance, located in the cafeteria. The overseer's office is also inaccessible, and features a different window than other Vaults in the region, as it is rectangular shaped. The entrance area is occupied by a colony of mole rats.

When using a railway rifle, Gary's head may come off and float in mid-air with the spike through his face. [verified] 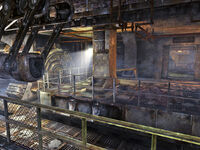 Entrance to the living quarters 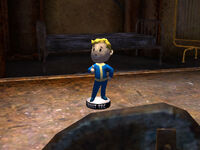 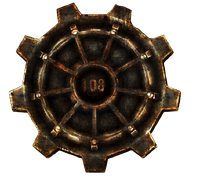