Fallout 3
“To Vault Security: If any of our residents notice any unusual odor or faint taste to the air, please assure them that everything is okay. There was a slight irregularity in our filtration system but nothing to cause alarm; the systems have already been corrected and are 100% functional again. If you notice anyone acting out in a strange manner, please report the disturbance immediately so medical assistance can be sent.”— Vault 106 overseer

Vault 106 is a Vault-Tec Vault located in the Capital Wasteland in 2277. It is located within a large cavern southeast of Arefu, directly south of Kaelyn's Bed & Breakfast, and a bit north of Jury Street Metro station.

As part of the Vault Experiment, psychoactive drugs were released into the Vault 106 air filtration system 10 days after the door was sealed. Information in the Vault's computer terminals reveals that the overseer knew that the inhabitants of his Vault would be fodder for drug testing and he instructed his security personnel to tell those in the Vault that everything was fine.

By 2277, the Vault's interior is mostly destroyed and filled with insane survivors. The psychoactive drugs are still being pumped through the Vault's air filtration systems, as evidenced by the player character's vision suddenly being shaded blue at the same time that hallucinations appear. At the very end of the Vault is a cave-like area, where skeletons and other items are located, including a mini nuke, suggesting some of the Vault dwellers may have been trying to blow their way out.

(Note: There are two entrances to the science lab, and the notes below pertain to only one, for directions.)

Entrance zone to the Vault

Corridor leading into the medical bay

Hallway leading into the dorms

One of the many ruined dorms

To anyone who gets this

The computer room during the hallucination

The computer room after the hallucination

The cave end and the mini nuke location

Ending of the cave, filled with skeletons 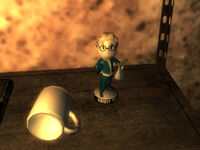 The Science bobblehead in the living quarters

Nikola Tesla and You, the book lies in the bottom crate

"Breathe deep in the blue. Relax"

Hallucination of James at work

Hallucination in the corridor, seeing James

Hallucination in the overseer's office

The opposite terminal room

Amata running towards you, then disappearing

Wally Mack, Paul Hannon Jr. and Butch hallucination during the fight with the Vault 106 survivor 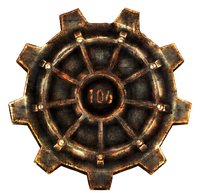