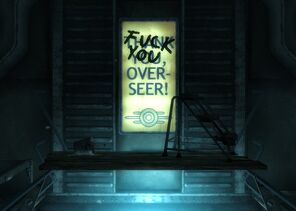 The Vault 101 Revolt was a conflict between the security force of Vault 101 and rebels wishing to open the vault and establish links with the outside world, beginning on August 17th, 2277, and continuing until an unknown date that year.

On the morning of August 17th, James escaped from the vault, and attempted to bring Jonas Palmer along with him, who was brutally murdered by security in the process. The overseer, Alphonse Almodovar, then ordered the vault into lockdown, with citizens required to remain in their quarters, and using emergency lighting only, due to a massive radroach attack. The overseer ordered that James' child be arrested on suspicion of co-operating with James' plans. His daughter, Amata reached the Lone Wanderer in time, and awoke them to warn them of the situation. A plan was drawn out to break into the overseer's office and traverse a secret tunnel leading to the vault entrance.

During the time between the Lone Wanderer's departure and the Capture of Project Purity, the situation in the vault deteriorated, and civil relations broke down. Families and friends went against one another, and the vault was split in two: one side wanting to re-open the vault and establish relations and trading links with the outside world, and the other wanting to revert to the previous state. Amata established the rebels alongside Edwin Brotch, which contained the majority of the vault's youth.

Dependent on the events of the first day of the revolt, the vault's leader would have been either Alphonse Almodovar, or Allen Mack. After days of fighting and sprints for the vault entrance, the rebels were pushed back into the corridor containing the clinic and classroom, where they made a final stand. Brotch was later arrested by security for suspicion of attempting to lead a run for the vault door. Several rogue members of security then began to secretly draw up plans to assault the rebel stronghold, with the objective of possibly killing a youth or two if required in order to make the rest fall back into line and revert the vault back to its previous state before James' departure. In addition, the Enclave contacted the overseer, offering amnesty and an official connection with the United States government, in exchange for free access to the vault and its database. They were denied.

Amata then sent out a distress radio signal into the surrounding area of the vault, going as far as the neighbouring town of Megaton, calling for the Lone Wanderer to return and solve the situation. When they returned, they had the choice of either convincing the rebellion to step down and cease their ideals, or to side with the rebellion and either kill or convince the overseer otherwise. Alternatively, the vault's water chip could have been purged and sabotaged, forcing the vault to be abandoned forever.

Depending on the actions of the Lone Wanderer, if the rebels were supported, Amata would have become the new overseer, the vault would have been re-opened, and citizens such as Susie Mack would venture out into the wasteland for trading. If the rest of the vault was supported, the rebels would have stepped down and the vault reverted to its previous state. However, this would doom the vault, since they have no genetic stock or diversity remaining to last for another generation. If the vault's water chip was purged and destroyed, the entire vault would have been evacuated, and the corpses of dead Vault 101 residents would be found dotted around the wasteland, and Amata would have been interrogated for the vault's location by the Enclave, and then executed.

The Vault 101 Revolt appears only in Fallout 3.

Retrieved from "https://fallout.fandom.com/wiki/Vault_101_Revolt?oldid=3151838"
Community content is available under CC-BY-SA unless otherwise noted.