“For on that fateful day, when fire rained from the sky, the giant steel door of Vault 101 slid closed... and never reopened. It was here you were born. It is here you will die. Because in Vault 101: no one ever enters, and no one... ever leaves...”— Narrator, Fallout 3 intro

Vault 101 is one of the Vault series of fallout shelters developed by Vault-Tec in the northwest area of Washington, D.C. in 2277. This Vault is located northwest of Megaton, and west of Springvale. It is the home of the Lone Wanderer until they leave to search for their father.

The Vault was constructed sometime in the 2060s along with the other Vaults in Washington, D.C. The Vault 76 overseer was originally selected to be its first overseer, but she refused the position in order to stay in Appalachia.[1]

Vault 101 has been opened numerous times, violating its original mandate, and became infested by radroaches during these events, making the Vault susceptible to additional large infestations as time went by. One of the main objectives of Vault 101 security has been the containment of these pests.

The original and underlying purpose of the Vault 101 Vault experiment, was to stay closed indefinitely, in order to study the role of the overseer when a Vault never opened. The limited genetic material would eventually result in inbreeding, had no "new blood" ever entered.

Vault 101 was supplied with most of the equipment it would need to function indefinitely, such as seen with spare parts for the water processor, but the Vault did not receive a G.E.C.K., a device that would only be useful for surface dwellers.

In their free time, the inhabitants of Vault 101 engage in various activities:

The "cake bake-off" is a competitive event, and in this event, contestants bake various types of cakes which are judged according to selection criteria, with the winner or winners being given a worthy prize.

On July 13, 2268, a notice on the bulletin board within the cafeteria announces the annual cake bake-off. This year, the judges will only accept bundt cakes.

"Founder's Day" is a holiday recognized on the Vault 101 calendar, and is celebrated on the 23rd of October. This holiday commemorates the overseer, who governed the Vault in the late 21st century. Two centuries later, Beatrice Armstrong, a Vault resident, continually honors the original overseer by dedicating one of her older poems to him. Beatrice cannot write a new poem during the latest Founder's Day, as she had trouble finding a rhyming word for "overseer."

Just after the Great War in 2077, the first Vault 101 overseer, in order to prevent anyone from leaving the Vault, created the illusion that the outside world was an uninhabitable nuclear-ravaged wasteland with absolutely no hope of existence outside of the Vault. This was accomplished through regular fake radio transmissions (recorded before the Great War), increasing the idea amongst Vault 101 dwellers that the only hope of survival was within the Vault. The first Vault 101 overseer died of natural causes in 2127, having prepared a subordinate to continue the Vault experiment.

Sometime before 2241, an unnamed Vault 101 overseer strongly favored of outside contact and assembled a survey team led by Anne Palmer. Together they began planning for their journey and theorizing types of mutations they might encounter. They finally went to the outside world around Vault 101, going up to Megaton sometime before February 10, 2241.

The survey team returned to Vault 101 on February 10 and analyzed their samples to see if the outside world was still dangerously irradiated or able to sustain life. They studied the giant ant they killed and decided to revise their survey plans in light of what they have learned. Lewis and Agnes Taylor, two members of the survey team remained in Megaton to serve as contacts between the two settlements and to further survey the surrounding environments. Agnes Taylor returned to Vault 101 around 2258. The overseer who preceded Alphonse Almodovar vanished after another expedition to the Capital Wasteland failed.

Alphonse Almodovar became the new overseer of Vault 101 sometime before 2258. Under his rule, the Vault changed into a police state with a strict policy of isolationism. Early in Alphonse's tenure as overseer around 2258-2259, James and his child, later known as the Lone Wanderer, came to the Vault seeking shelter and arrived in front of Vault 101. James proposed to become Vault 101's new physician in return for entry into Vault 101, and Alphonse granted his request.

After James and his child entered into the Vault, he kept his child ignorant of their origins because of his agreement with Alphonse, convincing the Lone Wanderer that they were born in the Vault. In the late 2260s, Jonas Palmer was appointed to be James' assistant by Alphonse Almodovar, who hoped he would be a voice of reason. Between 2265-2267, a girl escaped Vault 101 and made her way to Megaton. She entered in the Craterside Supply and asked Moira Brown to reinforce her Vault jumpsuit, but the girl never returned to pick it up, leaving her armored Vault 101 jumpsuit behind.

On July 12, 2268, the water purifier began to malfunction but it was repaired by Stanley Armstrong. On July 13, 2268, Butch DeLoria, Wally Mack and Paul Hannon Jr. began looking for a name for their future gang, which later became known as the Tunnel Snakes. In 2272, another dweller escaped from Vault 101 and also made his way to Megaton. He made his way to Moriarty's Saloon, telling Colin Moriarty that members of Vault 101 were brainwashed into believing the overseer was the only voice of reason.

Gradually, Alphonse Almodovar came to having an entire generation of Vault 101 dwellers who were playing along with the Vault experiments, keeping the secrets from their children. He and his followers continued to receive periodic information from the outside world, while those not in the know being told that things had gotten so bad that whoever was sending transmissions was no longer able to do so, reinforcing the thought that leaving the Vault was exceptionally dangerous.

On August 17, 2277, a radroach infestation started, and James used the event to his advantage, quickly escaping the Vault. In the ensuing conflict between radroaches and the security team, Agnes Taylor dies of a heart attack, Floyd Lewis and Vikki Hannon are both killed and Paul Hannon Jr. is critically wounded. Jonas Palmer is immediately questioned about why James has left and is subsequently brutally killed by Stevie Mack. Every member of the security force is then ordered to both contain the radroach infestation and capture the Lone Wanderer for questioning about James' departure. A few moments later, Amata Almodovar, daughter of Overseer Alphonse, awakens the Lone Wanderer, her best friend, and explains the situation.

During the Lone Wanderer's escape, Tom Holden and Mary Holden consider leaving as well while officers attempt to kill the pests. The Lone Wanderer is approached by a panicking Butch DeLoria, who desperately needs help saving his mother from the radroaches, who are attacking her in their room. Meanwhile, Amata is interrogated by her father and Officer Mack.

Pushing through to the entrance, Amata bids farewell to the Lone Wanderer just before Officers Park and Wolfe arrive. The Vault door opens and the Lone Wanderer leaves Vault 101, entering the Capital Wasteland for the first time in their memory.

Sometime after James' departure, Paul Hannon Jr. dies from a radroach bite after refusing treatment, and the Vault 101 overseer becomes more oppressive with the dwellers than before. Through the experience, the remaining Vault dwellers learn that life above ground is possible and this discovery creates a new crisis and division within Vault 101.

A group of rebels emerges, led by Amata Almodovar, including all of the younger Vault dwellers, who holed up in the Vault clinic. They wished to open Vault 101, interact with the outside world, open up limited trade with nearby settlements, and make excursions into the wasteland when necessary. The other group was led by the Vault 101 overseer, who wanted to keep the Vault closed permanently, in accordance with the Vault experiment. Butch DeLoria wished to abandon the Vault entirely and live on the surface.

Shortly thereafter, the Vault received radio contact from the Enclave seeking to gain entrance to the Vault, claiming they previously had access via a password that no longer worked. The overseer refused to let them in, being part of the group that wished to remain isolated. He worried about exposing the Vault and its dwellers to unknown factors or work to change their initiatives. The overseer could not divert his focus from the imperative task at hand, which was preventing the rebels from opening the Vault. In response, Amata began to send out a message via emergency frequency to the Capital Wasteland, hoping that the Lone Wanderer would come back to assist them in their struggle.

“Vault 101's residents remain protected from the outside world, with the exception of the occasional Radroach attack.”— Fallout 3 loading screen

Vault 101 is divided into four sections, including the main entrance, overseer's tunnel, atrium/upper level, and the lower level. The sections are separated by doors, and stairways connect floors and levels within two of the sections.

Levels and rooms are identified by signs. There are two paths to the Capital Wasteland, including a direct path from the atrium and a hidden tunnel named the overseer's tunnel. The sections are not directly stacked upon each other. They are staggered with each section moving progressively more westward as the Vault burrows deeper into the earth.

This section connects the Capital Wasteland to the Vault.

This section connects the overseer's office (in atrium/upper level) with the main entrance.

This atrium connects the main entrance to the lower level. It is divided into two sub-sections, the admin and the atrium. The atrium is located in the upper level of the Vault. Access to this room is by a stairway connecting the cafeteria to the atrium. Systems connects admin to the atrium. Rooms in the atrium are located on two floors - an upper and a lower floor. Rooms on the upper floor (dining/Mack living room) are inaccessible.

The atrium is the main room of the Vault and is used by Vault residents for large social gatherings and sports, such as one of Wally's birthday parties, where he and the other children played Hunt the Mutant. A notice in the cafeteria announces upcoming baseball games.

Rooms in the reactor level are the generator and storage room (BB gun shooting range), filter room (water purifier), and the reactor room.

This department is responsible for cleaning and maintaining the Vault. Jobs within this department include garbage burners, Pip-Boy programmers, waste management specialists, and jukebox technicians.

Maintenance technicians wear utility jumpsuit and work boots. Technicians sometimes carry a wrench or another tool with them and a utility key. Working for this department is considered undesirable by the students taking their G.O.A.T. exams. 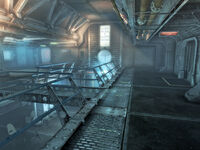 Locked storage on the lower level

Corridor leading to the overseer’s accomodations 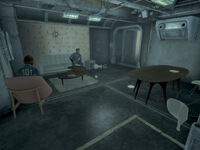 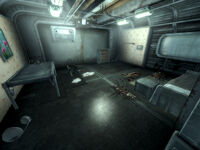 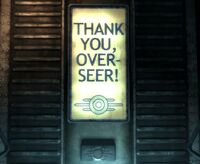 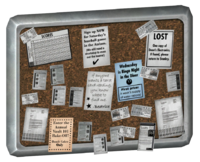 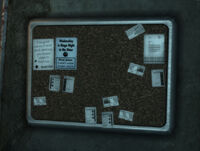 Flag of the United States seen above Mr. Brotch's desk in the classroom 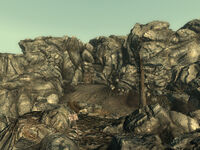 Barn with a mini nuke, just west of Vault 101

Mini nuke on a barn shelf