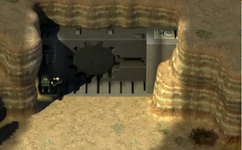 Vault 1 is one of the vault series of fallout shelters developed by the Vault-Tec Corporation, located somewhere in the Great Midwest Commonwealth. The vault's role in the experiment is unknown.

Vault 1 was constructed nearby a Midwestern city, with an easy-to-access entrance in a cliffside close to the outlying streets of the town. It seems to have been the first vault commissioned within Vault-Tec's Project Safehouse, following the wild success of the Los Angeles Demonstration Vault.

During the Great War, the military escorted residents to the vault, with Corporal Armstrong personally escorting one individual to the shelter. The vault was in a disastrous condition, with the overseer having not yet arrived, and an underseer named Frank temporarily taking his or her place. In addition, the life support systems were down, the generators were not being supplied with enough power, and the resident floating eye bot was damaged. A new resident fixed the broken systems and brought the vault into working order.

Vault 1 was to appear in the canceled Van Buren's tutorial and also appeared in the Van Buren tech demo.

Retrieved from "https://fallout.fandom.com/wiki/Vault_1?oldid=3391579"
Community content is available under CC-BY-SA unless otherwise noted.