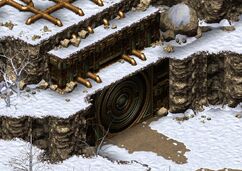 The upper level
The lower level

Vault 0 (also known as Calculator's lair) is a location in Fallout Tactics that can be reached from Cheyenne Mountain.

Unlike most Vaults involved in the Vault experiment, Vault 0 was not an experiment in human behavior. It was constructed by expanding and reinforcing the Cheyenne Mountain Complex in Colorado and was by far the largest of the underground Vaults (by volume). It was intended to be the nucleus of the Vault network.

Vault 0 was a place where the geniuses of the pre-War United States could be kept in cryogenic stasis; their brains were extracted and frozen for the duration of their "residence" in this Vault. They were hooked up together to one big supercomputer called the Calculator, which was supposed to function in collaboration with the brains of these pre-War geniuses to design and nurture an ideal human society in the post-War U.S. by educating the survivors and residents.

Due to budget cutbacks by the Department of Defense (because of a false sense of safety as a result of the repeated drills), several important backup systems were not included in the neuro-link systems.[citation needed] This made the Calculator to become corrupted and instead of releasing the robots to make the wasteland safe for humanity, the Vault 0 robots began to exterminate all life, completing the so-called "pacification protocol."

As for the unfortunate geniuses plugged in, most of them suffered severe brain damage, dementia and cognitive deficits from a combination of age and prolonged radiation exposure (not mutation). Technology, it seemed, has not been affected by the ravages of nuclear radiation.

Vault 0 thus becomes the endgame-setting of Fallout Tactics, as the player character, the Warrior, and their team of Brotherhood of Steel paladins have to stop the machine. The Warrior's squad came to Vault 0 after the nuclear explosion that opened the Vault door. There, they finally met the infamous Dagger Squad of the Brotherhood, which consisted of squad leader Paladin Lord Maximus, Tais, Maelyra, Khronis and Phoenix. Dagger Squad aided the Warrior in defeating the first wave of Vault protectors and then secured the lift which later could be used to enter the Calculator's chamber.

The Vault power nodes were rendered offline after the explosion, so the Warrior had to activate them manually. Going through security, living and cryogenics facilities of the Vault, the Warrior battles many robots and encounters remnants of Vault 0's citizens, who were revealed to be severely brain-damaged due to malfunctions in the cryogenic chambers. Ultimately, the Warrior activates the power nodes and proceeds to the lift, entering the Calculator's main lair.

The technology, aesthetic and design of Vault 0 are unique among the Vaults.

Vault 0 appears only in Fallout Tactics.

Retrieved from "https://fallout.fandom.com/wiki/Vault_0?oldid=3496122"
Community content is available under CC-BY-SA unless otherwise noted.