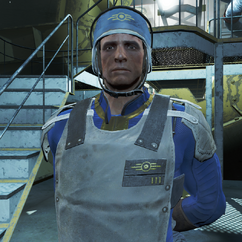 The Vault-Tec security are the security officers in Vault 111 in 2077.

Vault-Tec security enforces the overseer's initiatives and mandates. They are the only residents with authorization for carrying firearms, besides the overseer. They carry out security patrols on eight-hour shifts and are in charge of monitoring for signs of intrusion in the vault, checking for atmospheric leaks (contaminated air getting in), settling disputes between the residents and enforcing rules set down by the overseer and Vault-Tec.[1]

The standard accouterments of a security officer is armor worn over a Vault 111 jumpsuit and a matching helmet. The officers carry batons.

Retrieved from "https://fallout.fandom.com/wiki/Vault-Tec_security?oldid=3296109"
Community content is available under CC-BY-SA unless otherwise noted.