Helps Allies
“Congratulations on being prepared for the future!”

The Vault-Tec representative, more commonly known as the Vault-Tec rep, was a door-to-door salesman working for Vault-Tec in 2077. After the Great War, he became a ghoul, eventually settling down at Goodneighbor's Hotel Rexford in 2287.

The Vault-Tec rep began working as a salesman for Vault-Tec twenty years prior to 2077.[1] He was responsible for going door-to-door, assisting with finalizing paperwork for families pre-selected for entrance to their local Vault. For his work, the rep was to be rewarded a pack of steak knives. Once a month, he had his van serviced at the Red Rocket truck stop near Concord; the employees apparently found him irritating, describing him as an "uppity asshole" in their service logs.[2]

The rep was doing his rounds in the neighborhood of Sanctuary Hills in the final hours prior to the Great War when he visited the Sole Survivor's family, having attempted to speak with them several times before. Upon being greeted at the door, he informed them that due to Nate's service in the US Army, they had been selected for entry into Vault 111.

When the air-raid sirens went off, signaling that nuclear strikes from China were imminent, the rep approached the officer guarding the gate, attempting to force his way into the Vault his employer had constructed. Despite his persistence and association with Vault-Tec, he was refused entry and driven off when a power armored soldier ultimately threatened to open fire with a minigun. As he fled the scene, the salesman angrily informed the guards that he would report the incident.

Despite being unable to secure a spot inside Vault 111, the Vault-Tec rep managed to survive the nuclear exchange. To his surprise, the radioactive fallout did not kill him but mutated him into a ghoul.

The next 200 years would prove difficult for the former salesman. He lived for about a year in Sanctuary, while his only companion was Codsworth, who went about his usual business.[3] His once-valuable business skills were of little use in the anarchic aftermath of the war, and his status as a ghoul earned him scorn and animosity from un-mutated survivors. He was forced to live as a drifter and vagrant, squatting in various communities, where he was constantly taunted and threatened by the residents.[4]

Eventually, he discovered Goodneighbor, soon after being denied residence in Diamond City. This urbanized community located right in the heart of downtown Boston was a far cry from Diamond City, having been founded by those exiled from the green jewel's walls. While this earned him a warmer reception than he was used to in a new town, it did little to ease the trauma of the past centuries, and he generally confined himself to his room at the Hotel Rexford. It was some time after this that he was reunited with the Sole Survivor.

The Vault-Tec rep appears only in Fallout 4. 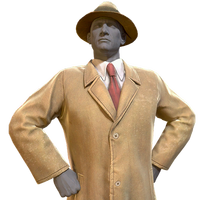 The Vault-Tec rep's outfit in Fallout 76 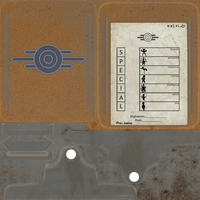