Fallout 3
“This is the only place I could think of hiding this message. In the event that anyone reads this, please try and get word back to Vault-Tec HQ that something very wrong is going on in the Experimentation section... something they keep referring to as the EEP. My wife, Mercia was "diagnosed" by the medical section as having some sort of disease they wouldn't identify. She's dead now, and those sons-of-bitches won't even tell me why.”— Daniel Koster, Vault 87

The Vault-Tec headquarters building is located in the Vernon Square area of the Washington, D.C. ruins.

This DC office building is located east of a Vernon Square metro station.

This was Vault-Tec's base of operations around the DC area. From this location (specifically, by accessing the Vault-Tec mainframe), one can learn the locations of Vaults 87, 92, 101, 106, and 108.

Accessing the mainframe requires authorization from all three system operation terminals. Station 3 is on the first floor of the administration room, with terminals 1 and 2 upstairs of the facility.

Resistance inside the building consists of security robots and automated turrets; the models inside are regular protectrons, sentry bots, robobrains, Mister Gutsies, automated turrets and one special model of the robobrain - the Masterbrain - on the same floor as the mainframe. One can turn off the Masterbrain and all other security robots in the Vault-Tec headquarters by using the correct command on the three employee terminals in the mainframe area. Alternatively, one can destroy Masterbrain and use it to shut off all other security robots.

The Vault-Tec headquarters appears only in Fallout 3. 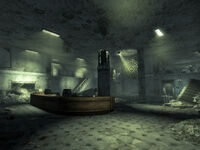 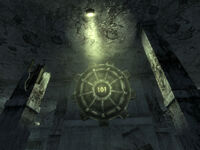 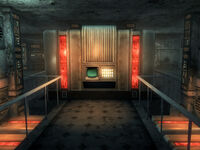 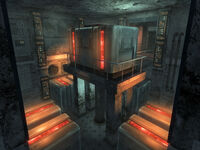