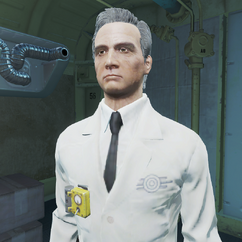 The Vault-Tec doctors guide the Sole Survivor and their family to their crypods in Vault 111 in pre-War Sanctuary Hills during War Never Changes. They claim that the chambers are for decontamination purposes. One such doctor is later found dead in front of the vault door controls. The Sole Survivor acquires their Pip-Boy 3000 Mark IV from the remains and uses it to open the vault and escape.

Vault-Tec doctors appear only in Fallout 4.

Put on your Vault 111 jumpsuit

Doctor with the Pip-Boy 3000 Mark IV near the vault's entrance
Add an image to this gallery
Retrieved from "https://fallout.fandom.com/wiki/Vault-Tec_doctor?oldid=3177325"
Community content is available under CC-BY-SA unless otherwise noted.