“Build a brighter future underground with the all-new Vault-Tec Workshop. Create a massive Vault and attract new Dwellers using pre-war industrial kits complete with retro-nostalgic furniture, lighting, and art. And like every good Overseer, run Vault-Tec approved experiments on your Dwellers to learn what makes an ideal citizen. Vault-Tec has given you the tools, the rest is up to you!”— Official description

Vault-Tec Workshop is the fifth add-on, and third workshop add-on for Fallout 4. It triggers automatically once level 20 is reached and the player character is outside the Institute. It will also trigger upon traveling to Quincy Quarries, which is south of Jamaica Plain.

Vault-Tec Workshop was released on July 26, 2016 on all platforms.

All notes that appear in the Vault-Tec Workshop.

The following can only built during related quests, and can only be built once.

A bug can occur in the DLC wherein a supply line appears between Vault 88 and another random settlement. The trigger for this is unknown, but it can occur at any point after the initial quest is given, even before gaining access to the Vault 88 workshop.[2] 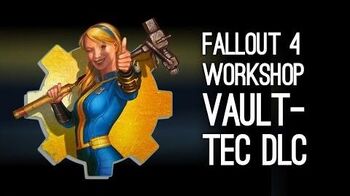