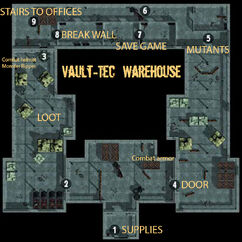 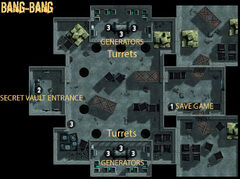 Vault-Tec Warehouse is located in the city of Los.

It consists of the main floor, a basement, and an entrance to the Secret Vault. It was heavily guarded by the Church of the Lost, a cult led by Blake, until an army of super mutants attacked.

Now, the mutants have entered the vault, and the warehouse has become a battlefield between the ghouls, super mutants, and horde of mutated radbugs. Also, a Shop-Tec terminal was located here, along with the turret robots, guarding the entrance to the vault.

Once in the "Bang-Bang" area and having started the Destroy Robot Turrets quest, a point of no return has been reached, as the way back to Docks of Los has been sealed.

The Vault-Tec Warehouse appears only in Fallout: Brotherhood of Steel.

Retrieved from "https://fallout.fandom.com/wiki/Vault-Tec_Warehouse?oldid=3239295"
Community content is available under CC-BY-SA unless otherwise noted.