“In 2031, Vault-Tec re-branded Morgantown's local college as Vault-Tec University, and some of their top executives and scientists either taught or graduated from there. Go Fighting Wendigos!”— Fallout 76 loading screen

Vault-Tec University (VTU) is a location in the Forest region of Appalachia.

In 2031, Vault-Tec rebranded Morgantown's local college as Vault-Tec University, and some of their top executives and scientists either taught or graduated from there. With Vault-Tec's support and the increase in public interest in the company with the advent of the Vault program, the university helped to revitalize Morgantown's economy.[1] Over the next 46 years, the company gradually stripped classes and subjects related to classic education and moved towards turning it into a vocational school for Vault-Tec employees. The majority of professors were fired, with only those teaching subjects relevant to the company's profile retained on the payroll.[2] Despite this, Vault-Tec still presented the university as having superior students to any other university in the nation.[3]

Otherwise, the company spared no expense in turning the VTU into the definitive Vault training facility. On top of detailed classes including sophisticated medical training (cut down from ten years to three months using Vault-Tec's SpeedTeach methodology), psychology and leadership, the university (according to its mission statement) also featured a unique environment in which the diverse student population could immerse themselves in all facets of education related to survival in the Vault, including a simulation shelter built into the university's foundations, filled with normally-restricted technologies (advanced mainframes, military-grade robotics, and compact fusion power systems) provided by the private and government sectors.[4] The university also offered courses on degenerative neurological conditions, radiation therapy, and family medicine at the Vault-Tec University Free Clinic.[5]

The simulation Vault closely replicated the feel of a real Vault and the experience of living in one, including the tests planned for each Vault. In fact, overseer candidates were expected to provide theses and experiment proposals, and then implement them during trial runs when the simulation Vault was put on lockdown and students within were expected to carry out their duties as if they were genuinely sealed within. Of course, the students themselves were monitored and provided useful data for Vault-Tec. The final test run focused on Drew Collingsworth's proposal for replacing regular food supplies with a food paste of his own design. Dean Elliot pushed him towards a more interesting experiment that would test the general willpower of individuals and how they react to deaths caused by food supply. The horrible pastes were mass-produced with the addition of an arterial plaquing agent that would cause rapid circulatory system decline, all in secret from Collingsworth. To the dean, it was simply an experiment to observe the rapid decline of order in a Vault.[6]

The test run started on October 15, 2077. The Vault was sealed for the next four weeks and the paste released to their use.[7] Unbeknown to the overseer, a black market developed almost overnight to compensate for the horribly tasting paste.[8] On October 23, the Great War occurred, but the simulation Vault remained intact and the experiment continued as normal[9] until October 26, when one of the maintenance staff died of a heart attack brought on by the plaquing agent.[10] After an autopsy confirmed the overseer's fears,[11] he tried switching back to regular rations, but the black market and extra strain put on them resulted in the stockpile depleting on October 31. When the dwellers realized the danger, they openly rebelled against Drew, who made desperate calls to the outside.[12]

Naturally, by this point, Morgantown had bigger problems to deal with and his pleas went without an answer.[13] His dwellers took it rather poorly and lay siege to his office on November 2, eventually breaking through the outer seal and cornering the overseer in his office. Unable to offer them a solution, the overseer locked himself in his bedroom. The desperate dwellers tried to break through reinforced interior doors using whatever office supplies they could scrounge up, overall failing. Everyone in the Vault eventually perished, starving to death or killing themselves.[14]

Sometime after their relocation to Fort Defiance, the Brotherhood of Steel made use of the facility's automated research terminal to analyze Scorched DNA samples. Knowing that there was a possibility they could be wiped out, they left behind instructions that allow the player character to continue the research.[15]

By 2103, Gilbert Hopson had taken temporary residence in the exterior of the facility, on his journey to visit every great learning institution in America.[16]

The interior of the main (east) building of Vault-Tec University has become significantly dilapidated. Ceilings and walls have collapsed or been knocked open, and the first floor rooms are infested by some feral ghouls.

Deeper inside lies the entrance to the VTU simulation Vault, which links the interiors of all three buildings together. The entrance room is the office used by the simulation Vault's mock-overseer, which contains several skeletons, a desk terminal holding records of the Vault's last, failed experiment, and a wall terminal that unlocks the door into the Vault proper. Docile Mister Handies, used to clean and maintain the facility, can be found in the rooms and passages.

The university is a sprawling campus with three surface buildings and a large underground simulation Vault that connects them all together. The main building (eastern) opens into a large foyer with a replica Vault door placed as a reminder of who the facility belongs to (mirroring the practice at Vault-Tec headquarters). The first floor includes the facilities management office (A1) with an armor workbench, the sleep and housing lab (A2) and physical activity lab (A3) in the southern wing, with the generator room powering the simulation Vault in the northern wing. From the lower level of the generator room, access can be gained to the Vault through the maintenance wing. The second floor contains the Eugene Davidson lecture hall with the steamer trunk, storage (B2), and the food preparation lab (B3).

The northern and southern buildings flanking the main structure double as primary access points to the simulation room. The southern building has been gutted entirely and the red brick facade conceals the primary entrance for dwellers and students. The northern one has been largely preserved by Vault-Tec and turned into an administration building. Both floors have a cruciform corridor layout, with offices and rooms nestled between the arms. A large reception room at the eastern side contains a stairwell connecting the levels.

The first floor contains, clockwise, the simulation Vault entrance (connecting to the overseer's office, Room 101), medical emergency care (102), facilities training (103), and young dweller development (104). The second floor contains the office of the computer lab (201), Dean of Admissions office (202), Office of the Overseer Training dean (203), and lounge (204). There are also the private offices of the professors retained by the VTU: G. Espino and J. Hollar (207) and M. Blake (208).

The simulation Vault stretches beneath the surface of the VTU and has a cruciform plan. The central atrium serves as a hub and has two levels. The lower level contains the gym, showers, and mess hall in the main area, and connects to the maintenance and records chamber. The upper floor contains the main access corridor and lockers in the southern wing, the residential wing with bunk beds in the west, the classroom and infirmary in the east, and the overseer's office in the north, filled with the dead dwellers who perished trapped beneath the ground. There is an armor workbench located on the first floor near the Vault door display.

The head of the Vault Boy statue, seen in the center of the university campus, was stolen by the Pi Kappa Mu fraternity in August 2077.[18] It can still be seen in the basement of Pi House, however, the statue on the campus has its head intact.

Vault-Tec University appears only in Fallout 76.

From patch 1.5.1.26 to patch 1.5.2.32, it was not possible to enter the interior while also being a member (not leader) of a team, regardless if public or private. There was no longer a prompt to enter the team leader's instance or one's own, only a regular prompt to enter the building. Doing so resulted in getting a message that "You have been removed from this instance", another loading screen and being placed outside at the fast travel location again. This was fixed with the release of Locked & Loaded.[patched] 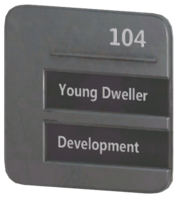