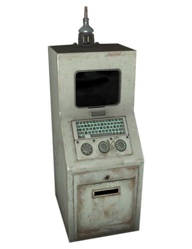 Apart from having the normal features of a standard settlement terminal, such as managing settings for spotlights, machines and more, this terminal lets the Sole Survivor track companions as the quest, Overseer's Most Wanted with each companion appearing as a marker on the Pip-Boy map. It can also be used to manage what task each settler is assigned to at the settlement. Note that it cannot track Automatron companions.

Can be crafted and used at any settlement.

For some reason, Codsworth never appears on the Vault-Tec management system.