Vault-Tec Corporation[1] was a corporation contracted by the United States government before the Great War to design and produce the vault system, a vast network of complex bomb shelters.

Vault-Tec designed and constructed advanced technologies. It was a major military contractor before the Great War, and as such, developed highly experimental, advanced and secret technologies. In time, Vault-Tec became so thoroughly integrated with top-secret military research done by the Pentagon that it had practically become a department of the U.S. government. The company still remained in private hands, but, because of its strong connection to the American government the principal personnel of Vault-Tec - its executives, top scientists, engineers, and so on - had to be aware of the true purpose of the vaults and Project Safehouse.

Vault-Tec's most notable product was the vault. Officially, the vaults were part of “Project Safehouse”, designed to protect the American population from nuclear holocaust. In actuality, they had a more sinister purpose, a project known as the "Societal Preservation Program"

The true reason for the construction of the vaults was to allow the government to secretly study pre-selected segments of the American population, observe how they would react to the stresses of isolation, and how successfully they would re-colonize the devastated Earth and stars after the vault opened.

In addition, most vaults were designed to conduct often immoral experiments on live human test subjects. The purposes and experiments carried out in each vault varied. They included: the use of the FEV on an unwitting test population (Vault 87), the development of super soldiers (Vault 92), the creation of an entire population of human clones (Vault 108), Vault 101 was subject to a "Never to be opened" policy: the inhabitants were never going to be allowed to leave, the frequent use of psychoactive drugs (Vault 106), the extended use of a virtual reality simulator on a population (Vault 112), and so on.

The experiment may be considered a success in terms of the data collected: data that was much more important to the Vault-Tec and Enclave scientists than a few hundred thousand lives. Perhaps they felt that the trade-off was mutual, as most of the vault dwellers would have died anyway if not for the vaults.

The only known vaults to continuously function successfully are Vault 101 and Vault 112. Their vault experiments were intended to continue indefinitely.

Vault-Tec headquarters is located near their Los Angeles Vault. Their regional headquarters for the Columbia Commonwealth are located in downtown Washington, D.C. There are branch offices in other cities such as Los Angeles.

The vault experiment was an idea created by Tim Cain during the initial stages of Fallout 2 development.

The developers intended for the player to first encounter information about the Vault Experiment as they read the Vault 8 records in Fallout 2. They could discover a classified file (opened with a successful Science skill roll) explaining the purpose of Vault 8 was to be a "control Vault," designed to hold 1000 people and open at a designated time. This file was intended to foreshadow the discovery of the true and sinister purpose of the Vaults.

The player was also intended[2] to apply his Science skill to the central computer in Vault 13 to obtain a history of Vault 13, the Overseer's involvement in the Vault Dweller's expulsion, and even worse, the true purposes of the Vaults. The Overseer was conscious of the true purpose of the Vaults as social experiments on a grand scale, and consequently drove out the Vault Dweller because of fear he would ruin the experiment... or uncover it. 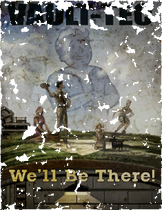 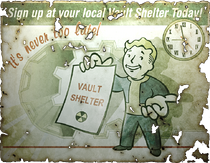 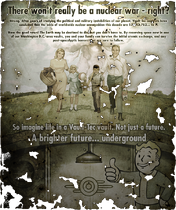 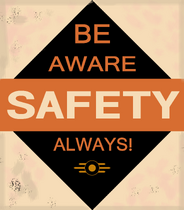 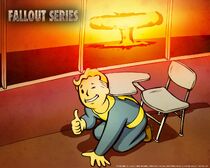 Retrieved from "https://fallout.fandom.com/wiki/Vault-Tec_Corporation?oldid=2274310"
Community content is available under CC-BY-SA unless otherwise noted.