Vault-Tec Corporation (also referred to as Vault-Tec Industries) was a pre-War defense corporation which won the federal government contracts to design and implement a network of bunkers known as Vaults.[1][Non-canon 1][2] These bunkers were designed to protect the population of the United States in case of nuclear holocaust.[3][4][5][Non-canon 2]

America's preeminent nuclear defense corporation existed as early as 2031, when it acquired and re-branded Morgantown's local college as Vault-Tec University, with some of their top executives and scientists either teaching or graduating from there.[6] This investment in cadre would pay off in the early 2050s: When the Euro-Middle Eastern War, the New Plague, and the collapse of the United Nations resulted in a nationwide scare, the government set Project Safehouse[7] in motion in 2054.[Non-canon 3]

The impoverished government financed the project with junk bonds and even then, only commissioned 122 of these shelters nationwide, allowing less than 0.1% of the population to save their life in the event of the holocaust.[Non-canon 4] Vault 13's budget was $400 billion dollars, and by the end of its construction the total costs reached $645 billion, well over 150% of the initial figure.[Non-canon 5] The staggering cost was further increased by the circumstances: As crucial elements of national defense, much of the project was classified and protected under the New Amended Espionage Act,[Non-canon 6] and the corporation received broad privileges in enforcing security, up to and including authorization for its private security to use lethal force if Vaults are activated.[8] Lack of oversight led to consistent mismanagement,[9][10][11] corruption,[12][13] and embezzlement[14] defining Project Safehouse before the War, even before taking the atrocious Vault experiments into account. Yet for all these problems, Vault-Tec was able to create a number of cutting edge technologies and develop shelters that legitimately protected the inhabitants.[Non-canon 7]

Some of these miracles manifested as breakthroughs in construction technology, allowing for these gargantuan bunkers to be constructed at a rapid pace.[Non-canon 8] Most were completed by 2063, although the construction of several Vaults was delayed, particularly Vault 13 (which only started construction in August 2063) and the network surrounding Washington, D.C.[Non-canon 9] Some Vault construction was delayed due to work stoppage.[15] Despite these problems, Vault-Tec began advertising Vaults in newly annexed Canada, though these were in the early stages of completion.[16]

Regardless of nuclear war, Vault-Tec had its own plans for Vaults. The company decided to use them as test environments to create technologies that could be used to redefine society. For this purpose, an entire Vault was set aside to act as proving grounds intended to test a variety of prototype devices with the aim of rolling them out through the rest of the Vaults.[17] Once Vault 88 was fully operational, the company expected to roll out new devices every fiscal quarter. Unlike other Vaults, Vault-Tec would send test subjects before any disaster scenario, starting in early 2078.[17] Human lives were considered irrelevant, with quick iteration time given a priority. The prototypes were meant to convert "useless" exercise into a socially-useful activity, manipulate the moods of the dwellers or even develop crude forms of mind control.[18] Ethical concerns were dismissed as counter-productive and close-minded.[19]

Ongoing drills in completed Vaults slowly created a cry wolf effect: Turnouts for the drills fell as the years went on, limiting the Vaults' future role in ensuring the survival of humanity.[Non-canon 9] However, even if they didn't, the shadow government decided against Vaults being shelters for preserving humanity.[Non-canon 10] After establishing control over Project Safehouse, they subverted it to their own ends. Rather than act to save humanity, Vaults were built to test their population as part of the Societal Preservation Program.[20] Only 17 of the Vaults were designed to work properly as control Vaults.[21] The 105 other Vaults featured a variety of scenarios, ranging from annoying to downright lethal, to gauge how humans acted in these scenarios for their own, nefarious purposes.[Non-canon 11] Some were not provided with enough food synthesizer for their population, others had only men in them, or were designed to open prematurely. The purpose of this experiment was to gather data for the Enclave's own projects, the exact purpose of which is unclear.[22]

When October 23, 2077, came and the Great War took place, the Vault-Tec air raid sirens blared, but the cry wolf effect resulted in just a fraction of people going into the Vaults. They were sealed and the experiments entered their decisive phase.[Non-canon 12] The control Vaults functioned as intended and protected their populations. Others, however, were not so lucky. Within the next few decades, many Vaults would fail as a result of their experiments. The few that did survive would often prosper. In 2091, after receiving the all-clear signal, Vault 8 opened and Vault City was founded.[Non-canon 13] A year later, the demonstration Vault in the ruins of LA opened. The inhabitants founded Adytum in what became known as the Boneyard.[Non-canon 14][Non-canon 15]

The primary focus of Vault-Tec was the development of a line of nuclear war defense installations and the technology necessary for their construction. Although their most recognizable product remains the Vault, the company had also developed cheaper alternatives, such as the Series 1000 shelter,[2] and contracted its technologies out to other entities requiring a proven means for constructing subterranean bunkers.[23] Its proprietary inventions, designed to improve the quality of life of a Vault dweller, include SimuSun Lighting, Floorsuck Autocleaner Systems, Culinator 3000 Kitchen Systems, Entertainotron Rooms and Eye-On-You cameras.[24]

Apart from construction and technologies necessary for sustaining a population underground, Vault-Tec has also developed nuclear reactors (e.g. Vault Star),[25] medical devices such as the organ extractor,[26] motion sensors based on Wattz Electronics' designs,[27] and even the SimTek 5000 virtual reality simulation suite for accustoming Vault dwellers with the outside[Non-canon 16] and the Vault-Tec Assisted Targeting System for facing any threats.[Non-canon 2]

Future-Tec was a division of the company tasked with developing cutting edge technologies to allow Vault dwellers to brave the horrors of a post-nuclear world. Their crown achievement was the G.E.C.K.[Non-canon 17]

A large exposition at the Museum of Technology in the capital was designed to promote their shelters and explain their functionality,[24] while promotional tours and awarding of prizes like the Pressed Vault Suit Award were also used to promote a positive image of the company.[28] An attraction at Nuka-World also highlighted an idealistic public image of what Vaults could do for mankind off-world. A massive merchandise line developed to promote Vaults and the company was also a part of their efforts and included baseball caps, lunchboxes, T-shirts, leather bomber jackets, golf tees, drink cozys, Vault-Tec bobbleheads (and the matching Bobblehead collector's stand), as well as Limited Edition snow globes showcasing landmarks around the nation.[29]

However, the reality for Vault-Tec employees was completely different. Employees received the Vault-Tec employee handbook, a monumental publication which outlined everything about the company and its procedures, down to bathroom breaks. The regulations were nothing less than draconian and oppressive: Vault-Tec's human resources and administration division considered 2.25 minutes (135 seconds) to be the reasonable length of a bathroom break. Exploitative and abusive labor practices seemed to be the norm.[30][31] As a strategic defense contractor for the government, Vault-Tec's affairs and all related publications (including, for example, the Vault Dweller's Survival Guide) were protected by the New Amended Espionage Act and any whistle blowing attempts would likely hurt the whistle blower more than the corporation.[Non-canon 6]

Vault-Tec was authorized to carry out drills for citizens selected for inclusion in the Vaults and operated its own alert system. Beta alert drills were carried out at regular intervals (sometimes as many as five a week) to test admission protocols and prepare the future Vault dwellers for an orderly admission into the Vault, in case of an Alpha Alert. Members of the experimentation staff were expected to participate in the drills each time.[32] Compliance and secrecy were accomplished simply by providing the scientists (frequently graduates or even students) with a hefty paycheck,[33] added by the implied threat of force should they decide to blow the whistle.[34]

Vault-Tec Vaults and technology appear in all of the Fallout games.

Promotional banner in the Vault 21 lobby 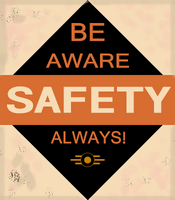 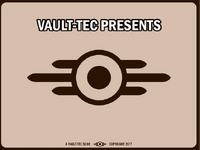 Beginning of the Vault 79 slideshow 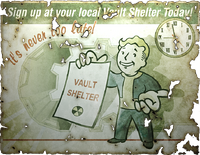 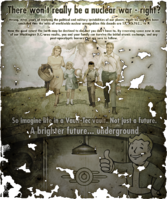 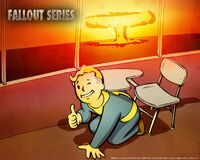 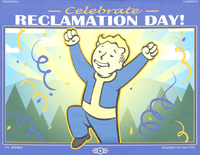 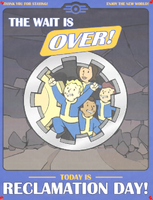 Vault-Tec calendar in The House of Tomorrow