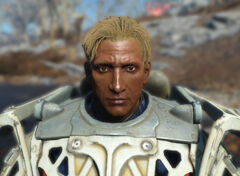 Knight Varham is a deceased Brotherhood of Steel knight found in a ruined abandoned house just south of Med-Tek Research in 2287.

Varham was a part of Paladin Brandis's Recon Squad Artemis assigned to search for technology and intel in the Commonwealth. However, not long into the mission, the team was ambushed by unknown assailants. During the skirmish, their power armor suits ran out of power, forcing Varham to scuttle them to prevent the assailants acquiring the power armor. Varham and three other knights were killed, forcing the remaining three members of the team to flee to the nearby National Guard training yard, where Knight Tara Astlin's body can be found.

The clothing appearing under the power armor frame is a vault 111 jumpsuit, while the clothing that can be taken from Knight Varham's inventory is a BoS uniform.

Knight Varham appears only in Fallout 4.

Retrieved from "https://fallout.fandom.com/wiki/Varham?oldid=3123048"
Community content is available under CC-BY-SA unless otherwise noted.