Following in His Footsteps
Take it Back! 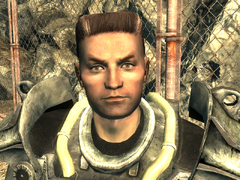 Vargas without his helmet

“Come on. Let's see if they've got anything to drink in this dump.”

Paladin Vargas is a Brotherhood of Steel soldier and operative in the elite Lyons' Pride squad in 2277.

Vargas was born in 2247. Vargas is a no-nonsense, professional type. He is Lyons' second-in-command. She relies on him for his experience and he serves as a mentor.[1]

He is initially encountered patrolling the lobby of the Galaxy News Radio building. After completing the Following in His Footsteps quest he can be seen patrolling the Citadel. When traveling across the bridge during the quest Take it Back!, Vargas could be killed. If he does survive, he will disappear from the game.

* Only until the end of Following in His Footsteps.

Paladin Vargas appears only in Fallout 3.

If you kill Vargas at any point in the game before starting Take it Back!, Liberty Prime will stay immobile, preventing the player from continuing the questline. [verified]

Vargas at the Citadel
Add a photo to this gallery

Retrieved from "https://fallout.fandom.com/wiki/Vargas_(Brotherhood_of_Steel)?oldid=3445949"
Community content is available under CC-BY-SA unless otherwise noted.