Vandal armor is a piece of armor in Fallout Tactics.

This armor is generally not available to player characters, although it can be looted from various raiders' corpses. While an upgraded version of the original raider armor, it still has little to no value to players later in the game, since it is little better than the starting leather armor but has pretty much the same stats as leather armor Mk II. 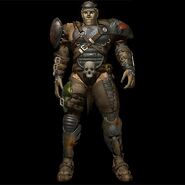