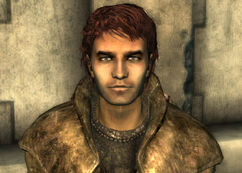 Blood Ties
I Want to Drink Your Blood

“My people call me Vance. I lead this group of weary travelers and outcasts who need a home.”

Vance is 41 and the leader of the Family. When he was younger, he decided that life in Rivet City was not for him and began to wander the wasteland. Soon, the ability to find others of his kind manifested itself. Over time, he gathered these outcasts and founded their home in Meresti. Using his traits as a basis and wanting to establish some sort of society, he molded the residents into "vampires" and taught them his bloodsucking ways.

He is a fair leader and has never demanded anyone do anything they did not wish to do, nor does he wish to put anyone in harm's way. He sees himself as a leader, but more in the way of a guide or a priest than a king. He addresses the residents of Meresti often so they will never "stray from their true nature" - that of the vampire. Vance is not violent and only attacks or orders attacks when survival demands it.[1]

Vance appears only in Fallout 3.

Retrieved from "https://fallout.fandom.com/wiki/Vance_(Fallout_3)?oldid=3294641"
Community content is available under CC-BY-SA unless otherwise noted.