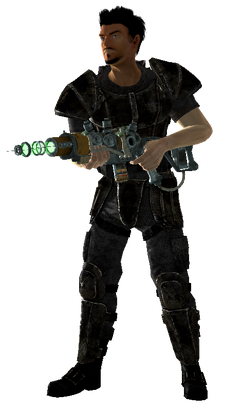 Birds of a Feather
Heartache by the Number

Van Graff thugs are the hired guns of the Van Graff crime syndicate in the Mojave Wasteland in 2281.

Van Graff thugs are found solely inside the Silver Rush (except for the two who are found dead at Durable Dunn's sacked caravan), guarding the store's large inventory of energy weapons. They are extremely well-equipped, wielding plasma rifles and wearing black combat armor, similar to the Van Graff combat armor.

With powerful weaponry, a very high Energy Weapons skill, good armor, and a relatively high amount of hit points, Van Graff thugs are very potent combatants, especially since they will usually be fought all at once, alongside the very powerful Jean-Baptiste Cutting as well as Gloria Van Graff.

There are a total of 5 Van Graff thugs guarding the Silver Rush, as well as Simon, the front door bouncer.

Retrieved from "https://fallout.fandom.com/wiki/Van_Graff_thug?oldid=3266896"
Community content is available under CC-BY-SA unless otherwise noted.