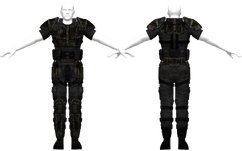 001251C9
“Standard issue is your run-of-the-mill combat armor, with a nice dark coat of paint for both brand recognition and sheer intimidation value.”— Simon

The Van Graff combat armor is a piece of armor in Fallout: New Vegas.

The armor is given to the player character at the Silver Rush during the quest Birds of a Feather. Once the first part of the quest is finished, the armor is returned. However, one can still acquire the armor with the methods below and it will not be marked as a quest item.