A tech demo of Van Buren was created during the game's development.

Several screenshots and one video of the tech demo were released at No Mutants Allowed on April 30, 2007, followed by the tech demo itself on May 2. The plot of the tech demo is not connected to the main storyline and was going to be included in the finished game as a tutorial.

It takes place in the United States of America during the Great War. The player character in the demo is referred to only as Citizen, though they share a model with the Prisoner. The Citizen made their way to the relocation center and was escorted to Vault 1 by Corporal Armstrong of the 4th or 13th Armored Infantry Division. To reach the vault, they must fight communist insurgents. After they enter the vault, they must help turn on the life support system.

The tech demo can be found here.

The save screen. Notice the Fallout 2 screenshot

The multiplayer options screen. There's nothing in it 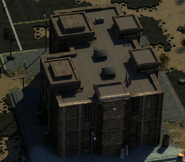 Go into this building to find a 9mm machine pistol, some 9mm rounds, a motorcycle helmet, and a first aid kit

A short video demonstrating the Van Buren tech demo created by Black Isle in 2003, presented by No Mutants Allowed. 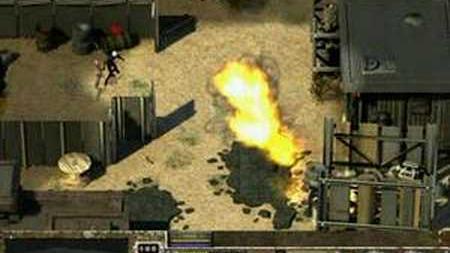