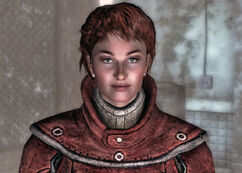 Brotherhood of Steel (Order of the Shield)

“I'm sorry, I'm very busy right now. Far too much to analyze. Perhaps one of the other Scribes could help you?”

Scribe Vallincourt is a scribe of the Brotherhood of Steel and one of Head Scribe Rothchild's assistants in 2277.

Her specialty is weapons technology and gadgets, which is very useful for the Brotherhood of Steel's tech gathering missions. She is as intelligent as she is beautiful but does not flirt or involve herself in anything else except for her work for the Brotherhood.

She is somewhat of a believer in the original ways of the Brotherhood that she is a bit wary of Elder Lyons's new direction, but the activation of Project Purity has changed her mind as of late.[1]

If the Lone Wanderer approaches her before finishing Death From Above, all she says is that she is too busy to talk. After the completion of Who Dares Wins, she comes off much more amicable and friendly, and heaps generous praise upon the player character.

Vallincourt's battle quotes are not voiced.

Scribe Vallincourt appears only in the Fallout 3 add-on Broken Steel.

Retrieved from "https://fallout.fandom.com/wiki/Vallincourt?oldid=3326652"
Community content is available under CC-BY-SA unless otherwise noted.