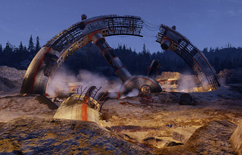 Valiant-1 is a United States Space Administration space station that once orbited Earth before the Great War.

Left in orbit after the nuclear holocaust, orbital decay and lack of thrust maintenance led the space station to fall back to Earth and crash in the former state of West Virginia. According to Caleb Fisher's analysis of surviving documents from the wreckage, an apparatus capable of firing "beams" at Earth was in construction before its crash-landing. The purpose of this "Space Beam" was unknown, though Fisher hypothesized it was either a weapon or a communications device.[1]

In 2103, the station's wreckage was later fortified by Meg Groberg's raiders and used as their headquarters, renamed to "The Crater".

Valiant-1 is a circular space station designed like an orbiting wheel. At the center was the command core (which was later converted into a raider encampment), where the main base of controlling the station was present. The module is then connected via connection tubes towards the rotating ring. These rings, such as Airlock C7, contained cargo and pressurized doors to allow spacecraft to dock on Valiant-1.

The Valiant-1 space station appears only in Fallout 76.

Retrieved from "https://fallout.fandom.com/wiki/Valiant-1?oldid=3421462"
Community content is available under CC-BY-SA unless otherwise noted.