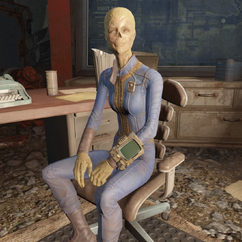 “We must make sure the inheritors of the Earth have every advantage.”

Overseer Doctor[1] Valery Barstow is the Overseer of Vault 88, surviving as a ghoul in 2287, in Vault-Tec Workshop, encountered during the quest Better Living Underground.

Valery Barstow was meant to become overseer of Vault 88, but the fallout shelter's construction had barely begun when the bombs fell. Barstow was already on-site and got stuck in the vault for more than 200 years, during which she turned into a ghoul. The only thing that kept her sane, and prevented her from turning feral, was her loyalty to Vault-Tec and their cause. She spent most of her life preparing vault experiments. Once saved by the Sole Survivor, she enlists their help in finishing Vault 88's construction and conducting its allotted experiments.

Since Barstow is fanatically dedicated to Vault-Tec's amoral experiments and the mindset behind them, her behavior towards the Sole Survivor changes depending on the way they run her experiments during the Vault-Tec Workshop questline. Going along with the original, ruthless tests will earn her approval. Conversely, choosing the humane options will result in Barstow getting angry and calling the Sole Survivor out on their lack of detachment from their test subjects. If the questline ends with the settlers being happy, such as using all "humane" perimeters in the experiments, Valery will furiously leave Vault 88 forever and may later be found dead upon the Sole Survivor's return to the vault.

Valery Barstow appears only in the Fallout 4 add-on Vault-Tec Workshop.

Retrieved from "https://fallout.fandom.com/wiki/Valery_Barstow?oldid=3485981"
Community content is available under CC-BY-SA unless otherwise noted.