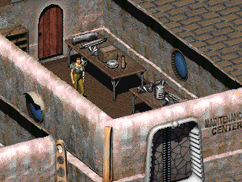 “Keep it up, Dad, and you'll NEED a wrench to get my boot out of your ass.”

Valerie is the brown headed child of Vic the trader, working at Vault City's maintenance center in 2241. She is dressed in brown fatigues and metal armor.[2]

She works as the town's primary repairwoman. Unlike most citizens, she is not a bigot, instead an attitude and short temper, more often than not leading to conflicts with other citizens, in particular those responsible for supplying her workshop. She seems to not have a particular focus, just repairs whatever needs fixing in the city, from laser turret parts through terminal elements to firearms.

Her father, Vic, conceived her with a Vault City citizen in 2221, when he arrived in the city on one of the caravans.[1] In the following years, he visited her on and off, until he stopped coming in 2236.[1] The benefit of being born of a citizen was that Valerie automatically became a citizen herself. Her mother died sometime between 2236 and 2241 of radiation poisoning due to drinking unfiltered water from the courtyard well.[citation needed]

When meeting her dad, Vic (once he returns with the Chosen One), she jokes that her mother died of 'brain fever' out in the wastes searching for him.

As the city mechanic, Valerie also upgrades weapons; the following are available (values after the slash apply if the player character has at least 6 Charisma or a Barter skill above 75):

* After given a super tool kit after finishing her quest.

Valerie appears only in Fallout 2.

Cinematic with Vic
Add a photo to this gallery

Retrieved from "https://fallout.fandom.com/wiki/Valerie?oldid=3421232"
Community content is available under CC-BY-SA unless otherwise noted.