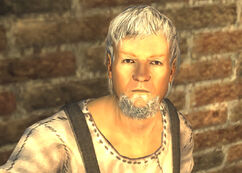 The vagrant is an old man living in Freeside in 2281.

The vagrant is an old, and apparently homeless, man who lives in Freeside. This non-player character seems to be pretty much useless, like the destitute traveler. Other than that not much is known about him.

The vagrant appears only in Fallout: New Vegas.

Sometimes, if the player kills the vagrant, you will hear quotes like "Are you crazy man, I've got two kids to feed!" or, "Help!", similar to when your reputation in Freeside is lower than neutral, and Freeside thugs try to mug you but flee. [verified]

Retrieved from "https://fallout.fandom.com/wiki/Vagrant?oldid=3124300"
Community content is available under CC-BY-SA unless otherwise noted.
... more about "Vagrant"
RDF feed
Has platform
PC +