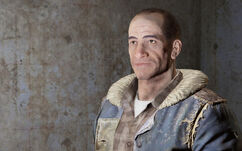 “Ah, the detective is back! You should have a drink, gumshoe!”

Vadim Bobrov is the bartender and co-owner of the Dugout Inn, living in Diamond City in 2287.

Vadim and his identical twin brother Yefim Bobrov are of East Slavic ancestry and are the proprietors of the Dugout Inn, a bar and hotel which is a popular hangout spot for Diamond City's lower-class residents. He is a rather cheerful and friendly fellow who enjoys joking around with his customers, who can rather be quite loud. Vadim is the polar opposite of his colleague Yefim, the innkeeper of the Dugout, who possesses a more quiet and reserved personality.

Vadim has a penchant for treating his personal finances as part of his establishment's expenditures, much to the chagrin of his brother, who consistently reminds him to pay his bills. He insists on serving drinks every hour of the day, however, he needs to exercise using his inside voice while behind the bar, and assisting Scarlett with keeping the place neat and tidy.[1]

Vadim Bobrov appears only in Fallout 4. He is also mentioned in the quest Game Show Gauntlet in Fallout Shelter.

Retrieved from "https://fallout.fandom.com/wiki/Vadim_Bobrov?oldid=3314335"
Community content is available under CC-BY-SA unless otherwise noted.