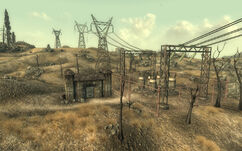 The VAPL-66 power station is a location in the Capital Wasteland in 2277. It is located south-southwest of Jocko's Pop & Gas Stop and northeast of the Dunwich Building.

It is a set of fenced-in power lines and transformers next to a power substation, currently being used as a small checkpoint for raiders, located near the southwest corner of the map.

The substation's interior
Add a photo to this gallery
Retrieved from "https://fallout.fandom.com/wiki/VAPL-66_power_station?oldid=3389048"
Community content is available under CC-BY-SA unless otherwise noted.