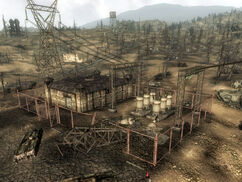 The VAPL-58 power station is a set of fenced-in power lines and transformers next to a power substation in the Capital Wasteland in 2277. It is located south-southwest of Arefu, north of Jury Street Metro station, and west of Vault 106, where two power lines from the north and east intersect.

The substation here is one of the few in the game which allows access to the roof. A fallen transmission line tore down a hole in the fences, making it possible for one to exit the power station without using the front gate.

The VAPL-58 power station appears only in Fallout 3.

Nuka-Cola Quantum and bottlecap mine in the substation

U.S. Army: 30 Handy Flamethrower Recipes
Add a photo to this gallery
Retrieved from "https://fallout.fandom.com/wiki/VAPL-58_power_station?oldid=3366480"
Community content is available under CC-BY-SA unless otherwise noted.