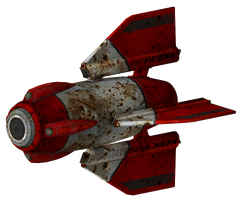 “V29-321G may look like a big, fat, red rocket, Rocketeers, but Ol' Fatty here ran circles around the Earth not so long ago, so let's see you keep up! Sure, V29-321G's re-entry gave it its more commonly-known nickname "Big Fat Fiery Fred," but here at REPCONN we chose to focus on the successes and apply what we learned about explosive-resistant shielding to future models and even our landing platforms!*”— Description on the plaque

The V29-321G (nicknamed Big Fat Fiery Fred) is a REPCONN Aerospace rocket and one of its many abortive designs. It became infamous after an incident which destroyed the launch site, although the company cheerfully deemed that an important lesson in creating explosion-resistant shielding for their rockets and launch sites.

A rocket of this type is mentioned and its model appears in Fallout: New Vegas.

The nickname is likely a reference to the B-52 bomber, which was often referred to as the "Big Ugly Fat Fucker".

Retrieved from "https://fallout.fandom.com/wiki/V29-321G_rocket?oldid=2295621"
Community content is available under CC-BY-SA unless otherwise noted.