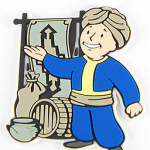 I see you are removing bugs which aren't yet overdue, please stop. Bugs are only overdue after 2 weeks, not before. Also, please remember removing content from pages is never to be tagged as a minor edit. Limmiegirl

So far the oldest bug I've seem you removing has been from Jan 31, which hasn't expired yet. Limmiegirl

I have recently adopted Fallout Nations wiki. For those of you who would like to come over and create your own fallout nation please do so by following the link below. I look forward to you being apart of the team. -SaintsCrusader http://falloutnations.wikia.com/wiki/Fallout_Nations_Wiki

Thanks for adjusting the BoS weapons pages to the new format. It's a major improvement! You feel like doing the same for the Tactics weapons page? Jspoel

You don't have to change U.S. Army to United States Army. It's fine like it is. Jspoel

You can change US Army to U.S. Army. Leave the rest as it is I think. Everybody will know what U.S. Army means. Soldier also starts with a lowercase s. Jspoel

You can change United States Armed Forces to U.S. Army with a pipe if you want. Also, why are you adding a space between a link and <br />?. Really unnecessary. Jspoel

The lowercase I meant was here, in the middle of a sentence. Jspoel

Titles are a part of the whole name when introducing someone, so they should all be bolded. As far as Buzz Babcock goes, his rank is never stated and there are several possible ranks of general. Great Mara (talk) 02:49, July 24, 2017 (UTC)

I don't see it stated on a source text (though he probably is a general). I suppose leaving the rank out would be ok then, or change it to Commander. Jspoel

I'll double check the VDSG myself and see what it says. The bit about main squeeze seems to ring a vague bell to me, so if it valid it will need to be fully referenced. Then it will be a case of confirming if it is canon or not. I know there is a relationships section in the CK, but I think that is not an accurate determination (although we do use it as such) as it's occasionally used by developers to instigate certain behaviours from characters. Sakaratte - Talk to the catmin 17:05, July 26, 2017 (UTC)

I was too focused on dealing with this issue to notice lol. You and Distusting had to notify me of my post count. Think it's taken me about 3-5 months to go from 1k to 10, maybe a little longer pretty sure I went patroller at 1 though.

If it's going to be anywhere in there it will most likely be the Old statehouse or Goodneighbor pages. Shouldn't be too hard to find. Sakaratte - Talk to the catmin 17:16, July 26, 2017 (UTC)

Just popped my own copy open and saw the same thing. I see you've already put it on the talk page. Unless there is any arguments against it I'm going to reference the talk page for the father/daughter relationship and the book for the squeeze section.

Hello Xa3! Sorry about me undoing your edit on the Anne Hargraves page, I thought you added the line "trade to post" but in reality you removed it, sorry about that. Better check my eyes lol. Best regards

I saw you going over the Temple of the Union guys earlier and I got curious as to what you were up to. I see you just fixed them up with the reference tag. Should stop any disagreements going forwards. Honestly Bluerx can be a bit of a pain at times, but he seems well intentioned. Sakaratte - Talk to the catmin 17:42, August 3, 2017 (UTC)

It's why I like citations and references. It clears things like this up. I'm just going back over and removing double references with the name tag. Keeps the references nice and tidy. Sakaratte - Talk to the catmin 18:03, August 3, 2017 (UTC)
As side thought, do you have the game guide? I'd like to add page numbers and the actual text extract if we can. Makes it fully cited. Sakaratte - Talk to the catmin 18:07, August 3, 2017 (UTC)

That works well, trim a bit of the fat off the paragraph and we have a solid reference. I'll update a couple with the but we need and it will be beyond refute. Sakaratte - Talk to the catmin 18:19, August 3, 2017 (UTC)

This is actually quite funny because I was going to send you a message asking if you'd like to join the Bug Verification Project, we really need someone who plays on the Xbox to test the giant list of Xbox only bugs. If you're interested in that, just let me know, or sign up.

And as far as your bug goes, I have already experienced it with Faneuil Hall as well as Bridgeway Trust, Faneuil Hall is a site for radiant quests, as well as a Legendary farming location, the loot respawns every time the "instance" is reset. Bridgeway seems to respawn for me every 2-3 In game weeks. I would have to test Safari Adventure, perhaps it's a location for a radiant quest as well and respawns? I will check though. Rebel427 ~ I'll be your huckleberry 03:07, August 4, 2017 (UTC)

That does seem faster than my respawn time, I usually have to wait the 2-3 In game weeks for places to respawn enemies/loot without having an active radiant quest for that location. Thank you for that, any help trying to combat these bugs is greatly appreciated, at least by me, I've checked I don't know how many at this point, and new ones just appear every day. Rebel427 ~ I'll be your huckleberry 03:42, August 4, 2017 (UTC)

As far as your bug in Safari adventure goes, you are correct. The Cash Register near the Nuka Cola Dark mixing station, the one closest to the Park map Pamphlets, does in fact re-stock prewar money after only 5-6 days. I waited 6 days, fast traveled away from Nuka-world, then fast traveled back and the prewar money respawned as well as the Park maps. So that's confirmed for PS4 as well. Rebel427 ~ I'll be your huckleberry 02:49, August 5, 2017 (UTC)

Did you talk these removals over in chat with a bureaucrat/admin? I presume you remove them because they're already in the infobox. But I think they can be as well in the characteristics. You see the same thing with a lot of the clothing item pages. Might as well let them stay there. Jspoel

And once again, you are removing the item descriptions from the pages. I shouldn't have to waste my entire break picking through your edits to fix them. Restore the descriptions to the pages or I'm taking this to an admin for content removal. Great Mara (talk) 18:13, August 8, 2017 (UTC)

You need me to define how removal of content from pages is a bad edit? And then making subsequent edits without restoring the content? And then edit warring when said edits are reverted, like they should be. Other editors aren't required to spend time reverting dozens your edits the slow way. It was your responsibility to fix them, and you didn't. Great Mara (talk) 18:30, August 8, 2017 (UTC)

From a finished project? Are you sure that I didn't quote editing criteria for item pages? You might want to check. Great Mara (talk) 19:13, August 8, 2017 (UTC)

As it stands, Xa3, has had a brief discussion with a crat, which proved not to get an affirmative answer. Mara has reverted the edits on the grounds of quality, to which I believe is stemmed from the removal of the information in characteristics. In my view, that information should be duplicated, the infobox acts as a quick summary of the items and the article is the detailed breakdown. As such the content should be in both places, this is also in part to do with how mobile skin works too.

Xa3, you should have stopped and engaged with Mara much sooner than you did. Guidelines are pretty clear on what is defined as edit warring: "Repeatedly reverting each other's changes ("edit warring") is bound to escalate the conflict instead of solving it. If you cannot reach a consensus, ask another user to mediate. In general, if someone reverts an edit you made, you should not re-add it without reaching a consensus on the article's talk page." This also means that Mara's further revisions are edit warring too, as it is not revision for vandalism, or even quality, but what Mara feels is how the article should be. This is a warning on both sides.

Layout guidelines as Mara has quoted do state the stats should be in be in the characteristics, clearly there might not be absolute consensus on that anymore.

I've spoken to Agent c and we have agreed that this should be resolved by consensus, raise a forum, discuss it and depending on the outcome, call a vote if need be. I am going to revert all the pages back to their original state now and any changes of the same vein must be abstained from until a resolution is found. Mara, if anything else of the like occurs, can you flag an admin or crat down to handle the situation rather than revert yourself please. Sakaratte - Talk to the catmin 19:18, August 8, 2017 (UTC)

Ah, that was me not paying attention, I have a lot of edits I need to check through per the about edit warring. If there is a couple tht I pull that are purely infobox changes, you have permission to put them back. Its going to be a long evening for me. Sakaratte - Talk to the catmin 19:57, August 8, 2017 (UTC)

Sorry chat got bogged down. We never did get a consensus on this. I'll try and be around later to discuss it when things settle. Sakaratte - Talk to the catmin 19:21, August 25, 2017 (UTC)

I've just taken a look at sealed wonderglue, Js actually merged it in to wonderglue already with redirects. If the redirects work I wouldn't worry about changing the links to point directly to Wonderglue (Fallout 4). Sakaratte - Talk to the catmin 19:32, August 25, 2017 (UTC)

I feel your edit of the Ultrajet Addiction page was unjust as the page for fallout 4 neglects to mention how to get rid of the addiction, and those searching for "Ultrajet addiction" wont be able to find the information they need on the correct page. You removed data that was very clearly relevant to the page, for no reason. I will be reverting this temporarily as there is no reason NOT to display this very relevant info. If you feel that this revert is unjust, hit me up on my talk page or take it up to the site admins. --AbashedAlbatross (talk) 15:01, August 26, 2017 (UTC)

I removed some of those dots you were adding at the end of some lines in the effects area of the infoboxes. I guess your logic was that some of those lines qualify as sentences. My logic is that either we put a dot at the end of each line, either we don't put any. To keep the wiki on the same level on 99% of its pages, I removed your dots. Feel free to discuss. --YOD ᕦ(ò_óˇ)ᕤ 08:37, August 28, 2017 (UTC)

It's probably carried over from the Marine armor page. Jspoel

Hello can we talk on private message on the talk page?

Hello ive got your message, and i am not that pleased, i make sure that the work i do is not seen as speculation, i dont do this for nothing, ive spoken to Agent C, and Sakaratte to make that the work im doing is good, can we please talk?—Preceding unsigned comment added by Seegson Executive Alex (talk • contribs). Please sign your posts with ~~~~!

Sorry, just pulled your edit off due to an edit war. Feel free to put it back in. I'm on mobile and don't have time to remove the edit that was the issue. Sakaratte - Talk to the catmin 14:56, September 4, 2017 (UTC)

Retrieved from "https://fallout.fandom.com/wiki/User_talk:Xa3?oldid=2780618"
Community content is available under CC-BY-SA unless otherwise noted.