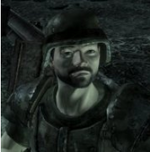 I removed your post on radiation because while it was informative, it was still speculation and we don't like speculating around here. I also renamed the page again because, while accurate, the page caters to the most prominent (and experienced) form of radiation. Kastera (talk) 03:33, June 29, 2011 (UTC)

Being pedantic is good. Often times I'm pedantic, but sometimes it's better to not be for the sake of generality and the masses of people who think the only type of radiation is "Radiation". I look forward to working with you. Kastera (talk) 17:14, June 29, 2011 (UTC)

I saw that. For future reference, it's better to keep what's on your talk page (within reason) if you want people to take you seriously. It shows that you want to actually talk the problem out, rather than just sweeping it under the rug. Kastera (talk) 17:27, June 29, 2011 (UTC)

Don't uppercase super mutant. Although it's uppercased in-game, we lowercase it here. Same goes for other creatures. Jspoel

Your move of Perk Edit

Don't move pages on a whim. The perk page was properly named before and I've restored it to its proper name again. --Kris

Retrieved from "https://fallout.fandom.com/wiki/User_talk:WikiaNinja?oldid=1192320"
Community content is available under CC-BY-SA unless otherwise noted.