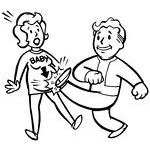 Uh, don't even recognize the name, who is this Plummer? Just because somebody says something happened, it does not mean it actually did happen. As you have said,hard evidence is lacking. Again, my apologies.WastedWarrior (talk) 08:57, May 11, 2015 (UTC)

Well, IF it was Cassie, it would have to be within a month's time, considering my recent activity. I don't recall any such interaction. Perhaps my accuser can recall the situation more clearly than I?WastedWarrior (talk) 09:31, May 11, 2015 (UTC)

If a moderator were to lie about another user that would be a serious breach of trust in their position, so I must assume good faith in my interactions with another moderator. Your ban has already passed, and I appreciate your apologies, just don't let it happen again.

If you wish to discuss the matter with her that is your prerogative. Regardless, my actions were justified; another moderator informed me of a prior warning, and the customary next step is a ban. Therefore, I consider the matter closed.

I did speak with her. Evidence follows.

As you can see, I was not warned about a "Similar Behavior", yes a warning was issued, yet it had nothing related my recent ban. Alecksander and I had a disagreement, and through our discourse, i became educated, and i apologized for my vitriol. Our discourse was not "dickish"..."heated", yes.

I DEMAND record of my banishment to be stricken from my talk page for reason of misinformation.

I would like to post here, for posterity's sake, that I will not rescind your ban because of this evidence. You were clearly warned before; the fact is was for a different chat rule violation is irrelevant. This wiki has always enforced a strong disciplinary policy towards the particular slur that was used. The chat conduct guideline clearly states that bans and warnings are handed out at our discretion, and I chose to uphold it.

Hey WastedWarrior, about your recent private messages... Well first, I want to warn you that your messages are basically breaking rule 1, harassment, and rule 10, spamming. If somebody tells you multiple times to drop the subject, you drop it. Next, as these images of yours are from a private chat, there are talks of this violating rule 4, personal privacy, so I would encourage you to remove the images before things get any worse. Paladin117>>iff bored; 02:00, May 14, 2015 (UTC)

I don't really see how these are breaking rule 1 and 10. If cops put me in jail for a day, and I can't talk to the police or to a court, how can people believe that we don't live in a police state? Especially as Follower said he could speak to her. I also don't see how rule 4 would apply here, as Cassie says in the last screenshot "go ahead". - Greets Peace'n Hugs (talk) (blog) 02:26, May 14, 2015 (UTC)

Retrieved from "https://fallout.fandom.com/wiki/User_talk:WastedWarrior?oldid=2261906"
Community content is available under CC-BY-SA unless otherwise noted.